Port Houston Chairman Ric Campo was honored as the 2022 Maritime Leader of the Year by the Greater Houston Port Bureau (GHPB) at its annual black-tie dinner held Saturday in Houston. The Port Bureau Board of Directors selected Campo as the 2022 honoree for his “steadfast commitment to improving the greater Houston port region.” 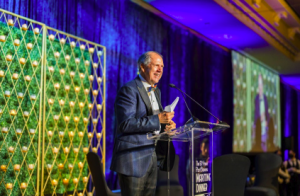 “Over 700 maritime and community guests attended the Greater Houston Port Bureau’s dinner to honor Ric Campo as the 2022 Maritime Leader of the Year,” said CAPT Bill Diehl, president of the Greater Houston Port Bureau. “As chairman of the Port Commission of the Port of Houston Authority, Ric has earned the respect of the industry and the community with his tenacious approach to solving problems and creating value to a very diverse group of stakeholders.”

Among other notable achievements, Campo was instrumental in the successful start of Project 11, the widening and deepening of the Houston Ship Channel, which broke ground in May. Project 11 is designed to improve the nation’s busiest waterway by creating safer and more efficient navigation for the ships and vessels that transport goods and cargo through the channel, and ultimately deliver more jobs and economic impact to the Houston region, state, and nation.

“I am honored and humbled by the recognition from the GHPB,” said Campo. “This recognition is clearly a direct result of the great team of commissioners and staff at Port Houston doing great things for our community.”

Campo has consistently shared praise for the success of Project 11 with the U.S. Army Corps of Engineers, sectors of the maritime industry, and the bi-partisan collaboration of elected officials and local community members. 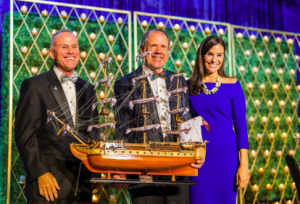 During the event, Texas Governor Greg Abbott expressed his appreciation for Campo’s leadership and dedicated efforts as Chairman of the Port of Houston Authority Commission via recorded remarks.

Abbott thanked Campo for “dedicating efforts to improving the greater Houston Port region.” He also commended him for promoting “economic growth and environmentally sustainable initiatives in Port Houston” and working “with the industry and local community to help advance the Houston Ship Channel and make tremendous port improvements.”

“Under [Campo’s] leadership, the Houston Ship Channel has been widened and deepened, leading to continued economic prosperity and job growth in the region,” said Abbott. “Thanks to [Campo’s] efforts, the Port of Houston will continue to thrive as an economic force for the region as well as for the state of Texas, creating jobs and opportunities for generations of Texans to come.”

“I congratulate Ric on receiving the Maritime Leader of the Year award. When we appointed him to the position, I knew he was the right person at the right time. As Chairman, his vision has steered Port Houston to new heights, and he has championed equity, diversity, and inclusion. Ric has prioritized building relationships in communities throughout the City of Houston and has opened communications with neighborhoods around the Port and works to build new partnerships between communities and the Port,” said Mayor Turner.

“I’m happy Ric is being recognized for his leadership and commitment to our region. Since being appointed Chairman, Ric has worked hard to open more doors to small businesses and prioritize economic growth in our area and helped to ensure that the future of the port remains bright amidst a complex and changing global economy,” said Commissioner Adrian Garcia.

Campo is Chairman of the Board and Chief Executive Officer of Camden Property Trust and has served in this capacity since May 1993. He was appointed as Chairman of the Port Commission in January 2019 by the City of Houston and Harris County Commissioners Court.

The unprecedented challenges in the global supply chain over the past two years have highlighted the critical importance of ports and the maritime industry, and the cargo moving through the Houston Ship Channel touches every Congressional District in the nation.

Known locally as Project 11 because it is the eleventh major Houston Ship Channel waterway construction project in its more than 100-year history, Project 11 is expected to add an increased $134 million annual economic impact and, ultimately, more jobs to the region. It is on schedule for completion in 2025.