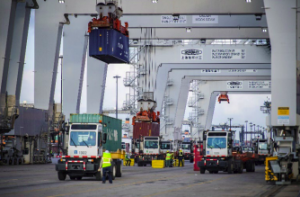 Port Houston recorded its biggest July ever for containers. Total volume in July was 328,498 TEUs, which is 10% more than the same month last year and the fourth-biggest month ever at Port Houston for container volume. Container throughput has reached 2,225,563 TEUs year-to-date, a 17% increase over last year.

Port Houston is experiencing rapid growth on all fronts. In July of this year loaded import containers were up 17% compared to the same month last year, at 159,881 TEUs. Loaded exports for the month were at 102,644 TEUs, a 36% increase over the same time period last year, with resins, chemicals, and other exports “Made in Texas” and throughout North America.

The trends seen locally largely mirror those reported nationwide. According to PIERS data, containerized imports from Asia grew by 6% in the first half of 2022 compared to the same time last year. The National Retail Federation reports retail sales are still expected to grow compared to 2021, though growth will start to recede as we continue in the second half of the year.

“Port Houston continues to build capacity and adjust to the changing market by providing more yard space, more equipment, and more hours of service to our customers,” said Roger Guenther, Executive Director at Port Houston. “Port Houston is meeting with customers, communicating updates, and working with our partners in the ILA to maintain cargo fluidity despite the extraordinary volume.” Guenther added, “Our most pressing concern is the urgent need for importers to quickly evacuate their containers to open up space, and for exporters and importers alike to increase their use of our Saturday gates, which are now open from 0800 – 1700 every Saturday.”

Total tonnage at Port Houston’sfacilities is up 24% for the year through July. General cargo in July was up 26% at 3,493,524 tons. Steel imports continue to be strong and were up 48% in July and 92% year-to-date, a positive sign for the energy sector. Auto imports remain sluggish, down 17% for the year so far.