A third member of the House of Representatives has tested positive for coronavirus after lawmakers were forced to shelter in place together during the violent riot at the Capitol last week.

Brad Schneider, a Democrat of Illinois, announced his diagnosis in a statement that specifically called out Republicans who refused to wear masks during the lockdown.

“Last Wednesday, after narrowly escaping a violent mob incited by the President of the United States to attack the Capitol and its occupants, I was forced to spend several hours in a secure but confined location with dozens of other members of Congress,” Schneider said in a statement.

“Several Republican lawmakers in the room adamantly refused to wear a mask, as demonstrated in the video from Punchbowl News, even when politely asked by their colleagues. Today, I am now in strict isolation, worried that I have risked my wife’s health and angry at the selfishness and arrogance of the anti-maskers who put their own contempt and disregard for decency ahead of the health and safety of their colleagues and our staff.”

Schneider is the third House member to test positive since last Wednesday. Fellow Democrats Pramila Jayapal and Bonnie Watson Coleman have also announced they were diagnosed with coronavirus.

Schneider said he has thankfully not yet experienced any symptoms and is receiving excellent medical care.

“Wearing a mask is not a political statement, it is public health guidance, common courtesy, and simply what should be expected of all decent people,” Schneider added in the statement.

“We can no longer tolerate Members coming to the floor or gathering in the halls of Congress without doing the bare minimum to protect those around them.” 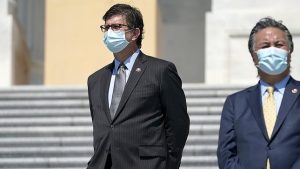