Legal battles leftover from the prior administration is likely to dictate which health-care policy priorities President-elect Joe Biden and his officials must focus on first.

Fights are ongoing over the scope of Trump administration rules that scaled back Obamacare’s anti-discrimination protections, gave health-care workers the right to refuse patients care based on their religious beliefs, and expanded access to skimpier health plans. Court schedules in the cases could force the new administration to make some quick decisions come Jan. 20.

“The Biden administration is going to be pretty quickly put in a position where it has to decide whether it’s going to defend Trump-era regulations, including at the Supreme Court,” said Katie Keith, a health law professor at Georgetown University.

Officials will have to decide whether to drop appeals, seek extensions, or ask for cases to be put on hold. If confirmed as Health and Human Services Secretary, Xavier Becerra could have to rely on his deputy to determine what to do with the cases he brought against the agency as California attorney general.

The justices agreed on Dec. 4 to hear the Trump administration’s appeal of court decisions tossing out approvals of state Medicaid programs that impose a work requirement on its beneficiaries. The government’s opening briefs are due just days before Biden is set to take office.

“They are walking into an incredible situation where the government will be on record arguing for the legality of experiments that the administration considers neither legal nor found policy,” said Sara Rosenbaum, a professor of health law and policy at George Washington University.

While the Biden administration is expected to notify the justices that the government has changed its position in the case, “it’s literally going to be an incredible race against the clock,” she said. Respondents’ briefs are due Feb. 17 under the court’s rules and the arguments will likely be held in March. Read more from Lydia Wheeler.

HHS Starts Reviewing All Rules in Last Trump Days: Health regulations that aren’t reviewed every 10 years to consider whether they are still needed would expire under a rule finalized on Friday. The final rule exempts some Food and Drug Administration rules and yearly ACA rules, in addition to procedural rules, regulations issued jointly with other agencies, and regulations around internal management. The move comes just a week before Biden’s inauguration and adds additional duties to his incoming HHS staff. Biden’s transition team said it plans to issue a memo on Jan. 20 to block regulations from taking effect that hasn’t yet, Shira Stein reports.

Biden said he will distribute more available doses of coronavirus vaccines, reversing the Trump administration’s practice of holding back second doses to make sure they’re available for people who’ve already had their first shot.

The move unveiled by Biden’s office Friday and endorsed by several Democratic governors is his response to the current sluggish federal vaccine rollout. “He supports releasing available doses immediately, and believes the government should stop holding back vaccine supply so we can get more shots in Americans’ arms now,” Biden spokesman TJ Ducklo said Friday in a written statement.

Trump’s administration has so far withheld about half of the allocated doses of vaccines made by Pfizer-BioNTech and Moderna, both two-dose regimens. The Trump administration has said it wants to ensure doses are actually available when people return weeks later for their second dose to fortify efficacy. Second shots are needed after 21 days for the Pfizer-BioNTech vaccine, and 28 days for the Moderna shot.

Biden’s statement did not make clear how many vaccines he would still withhold. Biden will release additional details this week, Ducklo said. The move risks that a hiccup in the delivery of vaccines may leave the administration without enough when people’s second doses are due. Biden’s team is confident that manufacturers can meet the demand, a transition official said. They’ll use the Defense Production Act to force production if needed, the official said. Josh Wingrove, Jordan Fabian, and John Tozzi have more.

Biden’s Stimulus Plans Set Up Fresh Fight: Biden’s plan to pass a multi-trillion dollar economic stimulus package early in his administration faces challenges in a closely divided U.S. Senate, with a potential impeachment trial for Donald Trump that could add to delays. Biden is set to release his proposals — the price tag for which has yet to be unveiled — on Thursday. The package will feature a range of support for state and local authorities long blocked by Republicans, a bump in direct payments to $2,000, and expanded unemployment benefits, along with funding for vaccine distribution, school re-opening, tax credits, rental relief, and aid to small businesses.

Divided Senate Looks to Bush-Era Power-Sharing: Senate leadership may look to a power-sharing agreement forged two decades ago as they begin negotiations over the daily running of the chamber and its committees. Democrats’ two victories in Georgia last week mean the Senate will be split 50-50. Soon-to-be majority leader Chuck Schumer (D-N.Y.) said that changes in how the Senate is run can’t be made until Georgia certifies the wins of Democrats Raphael Warnock and Jon Ossoff, new senators are sworn in, and Harris presides over the Senate. “But I look forward to sitting down with Leader McConnell,” Schumer told reporters.

Members of both parties said a starting point is likely to be the agreement used by the parties in 2001 when they were also at parity and Vice President Dick Cheney provided tie-breaking votes to get Bush administration priorities through.

Connecticut Outpaces N.Y. in Race to Vaccinate Residents: Gov. Andrew Cuomo (D) has insisted that New York’s health-care workforce be fully vaccinated before others in the state are immunized, but in neighboring Connecticut, a looser approach is drawing results faster. Cuomo on Friday reversed course after criticism, saying that New York will start scheduling vaccine appointments for seniors, teachers, and first responders. According to Bloomberg’s vaccine tracker, New York had administered just 38% of the doses it’s received from the U.S. government as of Jan. 7. Connecticut was through 46% of its supply.

Holiday travel stoked fears over a surge in cases, leading many schools to reconsider spring start dates. The CDC’s report underscores public health risks linked to returning to classes in person. The CDC study didn’t adjust for mitigation strategies adopted at state or local levels or on campuses. It also couldn’t determine whether new cases were connected to campuses or community transmission. 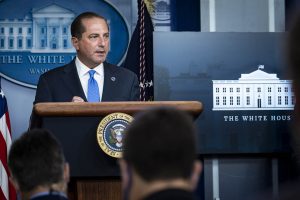