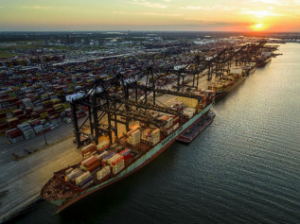 In September, Port Houston handled 353,525 TEUs, an increase of 26% compared to September of last year. This is the second-highest month ever for containers at Port Houston, following only August 2022. The increase in volume is largely due to demand for imported goods and a more efficient gateway, and loaded import container volume was up 31% in September over the same month last year. Overall, container volume is up 18% year-to-date at Port Houston’s terminals and is nearing the 3M mark already this year.

“We are doing everything we can to maintain fluidity at our terminals,” said Roger Guenther, Executive Director at Port Houston. “We’ve created additional temporary space on terminal and accelerated our investments in additional container yards. We appreciate our customers for working with us by evacuating their containers quickly, and want to encourage them to take advantage of the recentlyadded Saturday gate hoursin addition to our weekday gates.”

Steel imports were up 32% in September and year-to-date are up 76% and have surpassed 4M tons. Steel products, which include line pipe, structural pipe and tubing, and oil country goods are used in the oil and gas industry. Crude oil production in the Texas Eagle Ford region has been increasing steadily since early this year, and Texas rig count and number of drilling permits are both up.

Auto import units were up 241% in September compared to last year and are up 4% year to date. Total tonnage at Port Houston’s facilities is up 26% for the year through September.