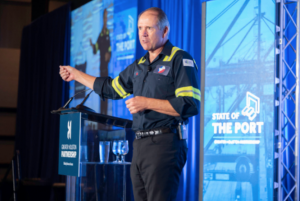 “The state of the Port is amazing,” Chairman Campo declared. His address emphasized the extraordinary efforts of people and partnerships working together through extraordinary times. “Lead, follow, or get out of the way – that’s how Houston gets it done,” said the Chairman, as he echoed others’ sentiments regarding the remarkable acceleration of the billion-dollar expansion and widening of the Houston Ship Channel.

“This is the fastest a project of this magnitude has ever moved in America, and it’s because of the people and partners who are getting it done, by working and doing the heavy lifting together,” he said of the waterway expansion and deepening effort called Project 11. Ranked as the #1 busiest port in the nation and known as the “Energy Capital of the World,” the Port of Houston’s success can be attributed to a diversity of cargoes and balance of imports and exports, Chairman Campo said.

“Ultimately, however, people make the difference in the success of the Port of Houston,” he said as he saluted the continued commitment of the Port’s people, partners, and channel users. In his remarks, he spoke of the remarkable spirit of collaboration and cooperation, people working together on the frontlines and behind the scenes under extraordinary circumstances to ensure the continued successful delivery of cargo, product, and supplies, and of helping to sustain a vital source of economic activity and jobs for the region, state of Texas, and the nation. However, Chairman Campo acknowledged that Port Houston public facilities are not immune to pandemicinduced strains on the global supply chain, but Port Houston staff and partners continue to work to keep freight moving to handle the historic surge in import container cargo.

Looking to the future and Port Houston’s commitment to reinvestment, Chairman Campo further highlighted the progress of the channel expansion and deepening program, adding that he looks forward to Port Commission consideration next week of the first Project 11 dredging contract. He shared that Port Houston fully expects the winning proposal to balance environmental, economic, and social issues in the best way for the entire community.

The Chairman also spotlighted Port Houston’s 100% renewable asset-backed electricity program, the first such program by a seaport in the United States. Efforts like this and others have resulted in a transformative 55% reduction in the carbon emissions footprint of Port Houston’s public terminals.

Chairman Campo proudly underscored the Port Commission’s adoption of a Diversity, Equity, Inclusion (DEI) Statement and Business Equity Program, expanding on Port Houston’s successful Small Business Development Program to target minority and women-owned business enterprises participating in procurement and contracting processes. “Building capacity is also about diversity,” he said. “If we do well, our community should do well too.” 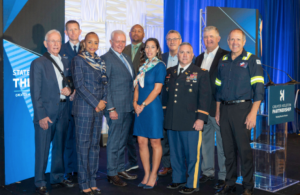 Chairman Campo’s profound message stressed Port Houston’s responsibility for creating a long-term legacy of economic impact, by creating jobs and investing in infrastructure to ensure competitive opportunities for the region and state of Texas and the nation.

“Ultimately, it’s about taking care of people working every day, making sure they have the support and resources to feed their families,” Chairman Campo said.