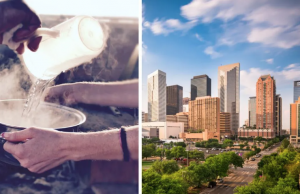 Text messages released this week to our partners at the Houston Chronicle confirm the city knew it needed to issue a boil water notice to the public hours before it actually did and grew increasingly frustrated over public perception and how long it took for the notice to be lifted.

Days after the boil water notice was issued, 13 Investigates requested some of the same information that was released to the Chronicle, including the text messages of Houston Mayor Sylvester Turner and Houston Public Works Director Carol Haddock.

The city has only released a few of Turner’s text messages to 13 Investigates, but the Houston Public Works Department released additional text messages from Haddock to the Chronicle.

State law requires public water systems to notify the public of a boil water notice when there is low water pressure – in this case, less than 20 pounds per square inch, or 20 PSI – as it could result in contamination, according to the Texas Commission on Environmental Quality. Water entities have 24 hours to notify the TCEQ about boil water notices.

Still, some city leaders were angry over the delay in notifying the public.

The morning after the boil water notice was issued on Nov. 27, Houston Council Member Dave Martin sent a text to Haddock calling the lack of communication “pathetic.”

“No freaking excuse why (council members) were NOT informed until the Media did,” he said in the text to Haddock on Nov. 28, obtained first by the Chronicle.

A text message from Haddock at about 4:30 p.m. that day said, “Confirmed. We have to issue a boil water notice,” but Turner previously told the public that the call to issue the boil water notice didn’t happen until after 6 p.m.

The night the boiling water was issued, Houston ISD canceled classes. Turner’s communications director, Mary Benton, sent an email to Turner, saying, “some are over-responding to the situation,” according to the documents the Chronicle obtained.

“No more of these one-off interviews because it’s putting us at a disadvantage,” Benton told staff. “I just wanna temp down what appears to be some excitement in the public. I know it’s an inconvenience but we don’t want people panicking. HISD really changed the perception here.”

While the city released some texts to the Chronicle this week, Houston notified 13 Investigates on Wednesday that it is seeking to withhold some of the text messages and emails we asked for related to the conversations around the boil water notice.