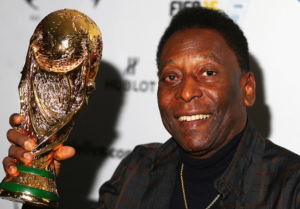 Pelé, the Brazilian soccer legend who won three World Cups and became the sport’s first global icon, has died at the age of 82.

“Everything that we are is thanks to you,” his daughter Kely Nascimento wrote in a post on Instagram, under an image of family members holding Pele’s hands. “We love you infinitely. Rest in peace.”

Pelé was admitted to a hospital in São Paulo in late November for a respiratory infection and for complications related to colon cancer. Last week, the hospital said his health had worsened as his cancer progressed. He died on Thursday from multiple organ failure due to the progression of colon cancer, according to a statement from Albert Einstein Hospital.

For more than 60 years, the name Pelé has been synonymous with soccer. He played in four World Cups and is the only player in history to win three, but his legacy stretched far beyond his trophy haul and remarkable goal-scoring record.

Tributes have been pouring in for the soccer legend. Pelé’s first club, Santos FC, responded to the news on Twitter with the words “eternal” shared next to an image of a crown.

Brazilian footballer Neymar said Pelé “changed everything.” In a post on Instagram, he wrote: “He turned football into art, into entertainment. He gave a voice to the poor, to black people, and especially: He gave visibility to Brazil. Football and Brazil have raised their status thanks to the King!” he added.

Portuguese star forward Cristiano Ronaldo sent his condolences to Brazil in a post on Instagram, saying “a mere “goodbye” to the eternal King Pelé will never be enough to express the pain that currently engulfs the entire football world.”

Kylian Mbappé of Paris Saint-Germain said of Pelé’s death: “The king of football has left us but his legacy will never be forgotten.”

Pelé’s wake will be held at Vila Belmiro, the headquarters of the Santos FC in São Paulo state, a spokesperson told CNN. The time and date of the event have yet to be announced.

Pelé was born Edson Arantes do Nascimento in Três Corações – an inland city roughly 155 miles northwest of Rio de Janeiro – in 1940, before his family moved to the city of Bauru in São Paulo.

The genesis of the nickname Pelé is unclear, even to the footballer. He once wrote in the British newspaper The Guardian that it likely started with school classmates teasing him for mangling the nickname of another player, Bilé. Whatever the origin, the moniker stuck.

As a child, his first taste of soccer involved playing barefoot with socks and rags rolled up into a ball – a humble beginning that would grow into a long and fruitful career.

But when he first took up the game, his ambitions were modest.

“My dad was a good football player, he scored a lot of goals,” Pelé told CNN in 2015. “His name was Dondinho; I wanted to be like him.

“He was famous in Brazil, in Minas Gerais. He was my role model. I always wanted to be like him, but what happened, to this day, only God can explain.”

As a teenager, Pelé left home and began training with Santos, scoring his first goal for the club side before his 16th birthday. He would go on to score 619 times over 638 appearances for the club, but it is his feats in the iconic yellow jersey of Brazil for which he is best remembered.

The world first got a glimpse of Pelé’s dazzling ability in 1958, when he made his World Cup debut aged 17. He scored Brazil’s only goal in the country’s quarterfinal victory against Wales, then netted a hat-trick in the semifinal against France and two in the final against host Sweden.

“When Pelé scored the fifth goal in that final, I have to be honest and say I felt like applauding,” said Sweden’s Sigvard Parling.

For Pelé, the standout memory from the tournament was putting his country on the sporting map.

“When we won the World Cup, everybody knew about Brazil,” he told CNN’s Don Riddell in 2016. “I think this was the most important thing I gave to my country because we were well known after that World Cup.”

Another World Cup victory came in 1962, although an injury sidelined Pelé for the tournament’s later stages. Further injuries hampered his next campaign in 1966 as Brazil exited the competition after the group stage, but redemption came in 1970.

That team – featuring the likes of Jairzinho, Gerson, Tostão, Rivellino, and, of course, Pelé – is regarded as one of the greatest ever assembled.

In the final – a 4-1 victory against Italy – Brazil scored arguably the most famous World Cup goal of all time, a sweeping, length-of-the-pitch move involving nine of the team’s 10 outfield players.

It ended with Pelé teeing up Alberto, who drilled the ball into the bottom corner of the net. Brazil’s mantra of jogo bonito (the beautiful game) has never been better encapsulated.

Pelé, who had considered retiring before the 1970 World Cup, scored a goal of his own in the final and a total of four over the course of the tournament.

“Before the match, I told myself that Pelé was just flesh and bones like the rest of us,” Italian defender Tarcisio Burgnich said after his side’s defeat in the final. “Later, I realized I’d been wrong.”

The tournament capped Pelé’s World Cup career but not his time in the spotlight. In 1975, he signed a $1.67-million-a-year contract in the United States with the New York Cosmos.

One of the greatest players

With his larger-than-life personality and extraordinary dribbling skills – a trademark of his game – Pele’s helped the Cosmos win the North American Soccer League championship in 1977 before officially retiring from football.

The league, which attracted further big names like Giorgio Chinaglia and Franz Beckenbauer, wouldn’t last, ultimately folding in 1984. But around the world, Pelé’s influence endured.

He remained in the public eye through endorsement deals and as an outspoken political voice who championed the poor in Brazil. He served as a Goodwill UNICEF ambassador for many years, promoting peace and support for vulnerable children.

Health problems persisted for much of Pelé’s later life. He got around with the support of a walker – an item he was filmed shoving around with disdain in a documentary released last year – and in September 2021, he underwent surgery to remove a tumor from his right colon.

Pelé’s cancer treatment continued over the past year. He was hospitalized in Sao Paulo in November as the 2022 World Cup was being played in Qatar, prompting an outpouring of support from the global soccer community and beyond.

The debate will inevitably rage about whether Pelé is the greatest player of all time – whether it is possible to compare Pelé’s achievements to those of Cristiano Ronaldo or Lionel Messi, who have rewritten soccer’s record books over the past 15 years, or to Diego Maradona, the late Argentinian star who captivated the footballing world in the 1980s and 90s.

In 2000, FIFA jointly named Maradona and Pelé as Player of the Century, but to some, the outright winner of the award should have been obvious.

“This debate about the player of the century is absurd,” said Zico, who represented Brazil in the decade after Pelé’s retirement. “There’s only one possible answer: Pelé. He’s the greatest player of all time, and by some distance, I might add.”

Exactly how many goals Pelé scored during his career is unclear, and his Guinness World Records tally has come under scrutiny with many scored in unofficial matches.

In March 2021, he congratulated Portugal’s Ronaldo for passing his “record of goals in official matches” – 767.

There is little doubt, however, that Pelé was, and always will be, football’s first global superstar.

“If I pass away one day, I am happy because I tried to do my best,” he told The Talks online magazine. “My sport allowed me to do so much because it’s the biggest sport in the world.”