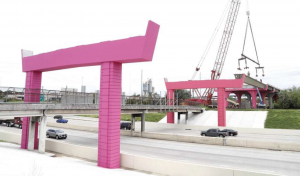 Bridge crews will pull double duty along Interstate 10 in downtown Houston this weekend, in the hopes of combining closings so drivers are detoured fewer times.

The closings, which cover a much larger area than typical, are so TxDOT can advance two separate construction projects which would have led to closing the freeway two straight weekends, said Danny Perez, a spokesman for TxDOT in Houston. Crews are rebuilding the Elysian Viaduct that crosses Buffalo Bayou and I-10 in to downtown, while another project is repairing the Houston Avenue bridge across I-10 west of downtown.

“The Elysian work needed both sides (of the freeway), so instead of having back-to-back weekends, we combined,” Perez said.

Though traffic on weekends has returned compared to earlier declines during COVID, the number of vehicles remains about 10 percent below common levels on Saturdays and Sundays, according to Houston TranStar. Still, TxDOT officials are warning drivers to expect significant delays as a result of the freeway closings, and possibly seek alternative routes.