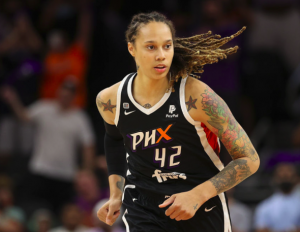 Houston-born Brittney Griner has been found guilty of drug possession in a Russian court and now faces a jail term of nine years. ABC News was the first to report the ruling that was announced early Thursday, August 4.

Jailed in Russia since February, the six-foot-nine basketball star tearfully begged a judge for leniency on August 4 in Khimki, Russia. The court, however, believed that the 31-year-old Griner deliberately brought cannabis-infused vape cartridges into Russia, which is illegal there.

“I made an honest mistake and I hope that in your ruling, that it doesn’t end my life here,” Griner said to the judge on August 4, according to Reuters. “My parents taught me two important things: one, take ownership of your responsibilities and two, work hard for everything that you have. That’s why I pled guilty to my charges.”

Today, American citizen Brittney Griner received a prison sentence that is one more reminder of what the world already knew: Russia is wrongfully detaining Brittney. It’s unacceptable, and I call on Russia to release her immediately so she can be with her wife, loved ones, friends, and teammates.  My administration will continue to work tirelessly and pursue every possible avenue to bring Brittney and Paul Whelan home safely as soon as possible.

How this affects the current U.S.-Russia prisoner swap proposal remains to be seen. As CNN first reported, the Biden administration has offered to send convicted Russian arms trafficker Viktor Bout, who is currently in the U.S. serving a 25-year prison sentence, in exchange for Griner and fellow detained American Paul Whelan.

President Joe Biden was said to support the proposed trade, which overrules the current Department of Justice stance that is decidedly anti-prison swap.

Secretary of State Antony Blinken announced at a July 27 press conference the Biden administration approached Moscow with the prisoner deal. Blinken called the arrangement a “substantial proposal” for Whelan and Griner, who are officially classified as wrongfully detained.

As CultureMap previously reported, Griner entered the plea in a Russian court on Thursday, July 7 for bringing hashish oil into the country in her luggage in February. In the country to play for Team BC UMMC Ekaterinburg of the Russian Premier League during the WNBA’s offseason, she was immediately detained and jailed by Russian Customs.

After worldwide scrutiny, her trial began on July 1.

Griner told the Russian judge that she had “inadvertently” brought the hashish oil into the country — where it is illegal to do so —  and asked the court for mercy, ESPN reports. She could face up to 10 years in prison.

During her detainment, calls came from across the globe for her release, especially to President Joe Biden, whose administration was criticized for being slow to act. “I’m terrified I might be here forever,” she wrote to Biden in a handwritten letter.

Officially, the White House said it would employ “every tool” to release Griner, stating that Russia’s invasion of Ukraine complicated negotiations. Russia’s demand for a prisoner swap led to the belief among many that Griner, a woman of color and gay, was targeted and made to be a political pawn, as the New York Times notes, between two adversarial global superpowers.

Her wife, Cherelle Griner, made a recent publicity tour, where she made passionate pleas for her wife’s release and shared that she was disappointed to not hear from the White House personally, prompting phone calls from President Biden and Vice President Kamala Harris.

Born in Houston, the six-foot-nine Griner was the top-ranked female basketball player in the nation and chose to stay in state and play for the Baylor Lady Bears, where she became one of college basketball’s biggest stars. Famed for her unstoppable post presence, defensive skills shot blocking, and offensive dominance, she was drafted by the Phoenix Mercury professional franchise. She later led Team USA to Olympic gold in the Rio and Tokyo games.