Port Houston marks National Infrastructure Week by highlighting the groundbreaking for the start of construction work to support widening and deepening the 52-mile Houston Ship Channel. Known as Project 11, the project’s far-reaching benefits impact the United States and the entire Gulf region and have generated bipartisan praise from officials across the state and nation. 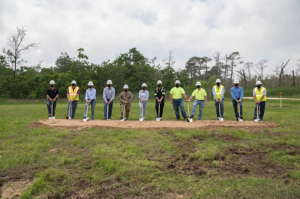 The nearly billion-dollar project will create safer and more efficient navigation for the ships and vessels, calling the more than 200 private and eight public terminals that comprise the Port of Houston.

“Our port serves as the anchor for the Texas region,” Port Houston Chairman Ric Campo said. “Expanding the Houston Ship Channel to accommodate the growth of vessel calls, vessel sizes, and cargo needs for customers and consumers will continue providing over 3.2 million jobs and $802 billion in economic value to the nation.” 2 Port Houston is the local sponsor of the Houston Ship Channel, providing stewardship of the federal waterway. Executive Director Roger Guenther praised its strong partnership with the U.S. Army Corps of Engineers (USACE). He applauded the USACE’s “continued commitment” to delivering for the Texas Gulf coast “vital engineering solutions to secure our nation, energize our economy, while also reducing disaster risks.” 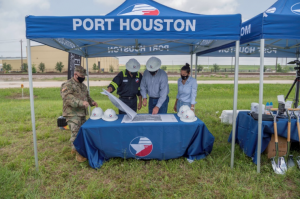 “As we begin construction of Project 11, we have a glimpse into the future we are building,” Guenther said. “This project will enable vessels to deliver goods to our doorsteps, export USAmade cargo around the world, provide safe passage for thousands of ships, and shape the livelihoods of millions of Americans for generations to come.” “The Army Corps of Engineers looks forward to continuing to partner with Port Houston to deepen and widen this lifeline for our nation’s exporters and importers. Port Houston is a perfect example of ‘if there’s a will, there’s a way,’” said USACE Galveston District Col. Timothy Vail, who delivered remarks during Monday’s groundbreaking ceremony, underscoring its importance.

“The Port and the Army Corps of Engineers are making sure that this project is delivered in line with the priorities of the American people, which are to get it done fast, so we see immediate returns on the transportation efficiencies it will provide, and to start thinking about what’s next,” he added. Chairman Campo recognized the support and collaboration “of hundreds of stakeholders” including “the steadfast advocacy of our local and Congressional delegations, the leadership of Col. Vail and his team, the vision of the Port Commission, and the expertise of our contractors, designers, and Port Houston staff” to reach this milestone.

A testament to this milestone’s significance is the bipartisan praise it elicited from elected officials across Texas and the nation, including U.S. Senator John Cornyn. “Access to safe and efficient infrastructure is critical as more goods come in and out of Texas ports each day,” said 3 Sen. Cornyn. “I applaud Port Houston’s partnership with the U.S. Army Corps of Engineers and will continue to do everything I can to improve the lives of Texans in the Port of Houston.”

U.S. Representative Brian Babin, a member of the House Transportation and Infrastructure Committee said, “Ensuring this important initiative was brought to life has been a top priority for me in Congress. Expanding the HSC will revolutionize Texas by modernizing and improving our infrastructure, which is a critical step toward advancing America’s energy independence and strengthening our national security.”

U.S. Representative Kevin Brady said, “The Houston area – and our nation – is eagerly awaiting completion of Project 11. This project will support over 1.3 million Texas jobs, $800 billion in economic value to the nation, and will ensure the U.S. remains a top energy exporter. I’m proud to have supported this project since the beginning and look forward to its next steps.”

U.S. Representative Sylvia Garcia said, “The Port of Houston, my district, and our country are powered by highly-skilled union workers who build and transform our nation’s transportation, trade, energy, and technology sectors. I am working hard to make sure that our infrastructure is designed to meet the demands of the modern world, and that it supports a robust, growth-driven, and equitable economy.” U.S. Representative Al Green said, “The Port of Houston is an invaluable asset not only to the City of Houston and the State of Texas but to our nation as a whole. With nearly 700,000 jobs in the local region generated from the terminal activity and more than 285 million tons of cargo handled in 2019, the Port of Houston has been a key component of our country’s infrastructure since 1914. I am proud to support the Port in its efforts to expand.”

U.S. Representative Sheila Jackson Lee said, “The Houston Ship Channel generates and processes over 20% of the Texas GDP and this is why I continue to advocate for funding for the important work of the U.S. Army Corps of Engineers, which includes Project 11 to deepen and widen the Houston Ship Channel so that the Port can continue to serve the people of Houston, the State of Texas and the nation.”

U.S. Representative Eddie Bernice Johnson, former chairwoman of the House Transportation and Infrastructure Committee’s Water Resources and Environment Subcommittee said, “I would like to commend Port Houston for the port’s tremendous advancements on Project 11, a critical project which benefits not only the state of Texas but the entire nation. I am proud to continue working closely as a partner to the Port of Houston. The continued progress on Project 11 will serve to accelerate and augment the port’s success and capabilities into the future.”

U.S. Representative Michael McCaul said, “By improving this port, more manufactured goods and energy will be exported – supporting millions of jobs in both the Houston area and across the United States. I am proud to support the Corps’ mission in carrying out this project.”

Texas Lt. Governor Dan Patrick said, “Projects like Project 11 are key to making the Texas economy even stronger, and I congratulate the Port Houston for moving forward on the Ship 4 Channel expansion. Project 11 will not only affect the Port of Houston region but its impact will also be felt throughout Texas.”

Harris County Precinct 2 Commissioner Adrian Garcia said, “There is a no more important piece of infrastructure in Texas and possibly the entire United States than the Port of Houston. The upcoming widening project will bring about more economic development and more jobs. However, we must also look at supportive infrastructure surrounding the port and the associated new developments that will keep the Port of Houston as the premier commercial waterway in the world.”

Lastly, further signaling its significance to the region, Houston Mayor Sylvester Turner said, “The Port of Houston Authority is integral to the economic success of the entire Houston region. The Project 11 deepening and widening project on the Houston Ship Channel will ensure that we can create jobs and expand the capacity to import and export goods into the future.”

Turner concluded his remarks noting the support and appreciation for the collaborative efforts for this historic milestone, “I sincerely thank the congressional delegation, Port leadership, and partners involved in this extraordinary endeavor. By working together, we are building the infrastructure that is needed to make the channel safer and more efficient. We all benefit from a commitment to invest in the project and secure the Houston Ship Channel’s global position as a strong and competitive waterway.”

The first Project 11 construction contract was awarded by Port Houston at the April Port Commission meeting and will prepare the site to receive dredge material as the channel is expanded. In addition, more than half of the total $24 million in contracts approved at that meeting was to support Project 11 efforts, further demonstrating the Port Commission’s continued efforts towards stewardship of the channel.