There are restrictions, including no standing.

“This applies to bars as well,” tweeted the judge. 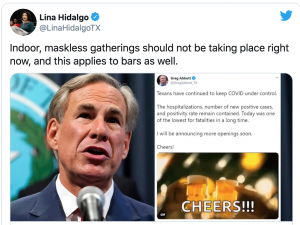 Eyewitness News contacted Hidalgo’s office directly and asked if Harris County bars will be allowed to reopen after the governor’s announcement.

Her office responded saying, “not at this time.”

The Gov. Greg Abbott said the authority will be given to county judges to decide whether to open at all, but if they choose to, the capacity cannot exceed 50 percent.