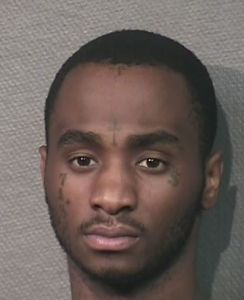 A 22-year-old gang member who bragged on social media that he followed a rival gang member’s family from a funeral and then shot at them in two separate drive-by shootings has been sentenced to 70 years in prison for his actions in a city-wide crime spree, Harris County District Attorney Kim Ogg announced Monday.

“This gang member staked out a funeral so that he could terrorize a grieving family and tried to gun them down as they mourned,” Ogg said. “The families of his victims deserve to know that he will spend decades in prison for his intentional disregard for people and the rule of law.”

Joseph Pickron, a documented member of the 103 gang, was convicted in a trial last week of aggravated robbery with a deadly weapon for pistol-whipping a woman while carjacking her on August 26, 2017.

The first-degree felony carried the same penalty range as murder, up to life in prison.

After he was convicted, jurors tasked with deciding his punishment heard that Pickron was freed on a $50,000 bail a year after his arrest in August 2018.

Jurors heard during the trial that while he was free on bail, Pickron was involved in gunning down Jarell Parnell outside of a club on September 30, 2018. The drive-by shooting erupted as part of a war between two gangs: the 100 Percent Third Ward or 103,which Pickron was part of, and the Young Scott Block, or YSB. The years-long conflict has claimed the lives of several gang members and innocent bystanders.

About a week later, Pickron went to Parnell’s funeral then followed the mourning family to a restaurant and opened fire on them in the parking lot of Pappasito’s and Pappadeaux restaurants in the 2500 block of the 610 South Loop. No one was seriously injured in that shooting.

From there, several grieving funeral attendees fled and reunited at a gas station on Cullen Boulevard at Ward Street. Thirty minutes after the shooting, Pickron found them standing outside of that convenience store, and opened fire hitting five people and killing Decarlos Washington.

Assistant District Attorney Keaton Forcht, who prosecuted the case with Sarah Neyland, said shell casings at both scenes, social media accounts and witnesses who identified the same red car showed that Pickron was connected to both  drive-by shootings that day.

“The Houston Police Department did a fantastic job uncovering the evidence,” Forcht said. “We can see that the defendant was bragging that he went to the funeral, wanted to kill them at the funeral, and then waited until they went to the Pappadeaux’s and then the gas station.”