Harris County Judge Lina Hidalgo on Thursday asked Gov. Greg Abbott in a letter to confirm that drive-thru voting is legal, amid worries that the Texas Supreme Court will block the voting method.

Hidalgo said the governor’s input is needed because Harris County officials unsuccessfully have sought an answer from Secretary of State Ruth Hughs.

The Texas Republican Party has argued to the state Supreme Court that drive-thru voting violates the Election Code, and thus should be halted. Attorney General Ken Paxton last week issued an opinion in which he suggested Harris County’s drive-thru voting option, new this year, was unlawful.

Hidalgo and County Clerk Christopher Hollins are concerned the Supreme Court may invalidate votes cast at a drive-thru sites. Hollins wrote a letter to Hughs earlier this week, asking her to affirm the legality of drive-thru voting.

“In absence of such an assurance, we can only conclude that state officials, in concert with the Texas Republican Party, are laying the groundwork to intentionally disenfranchise the tens of thousands of Harris County voters who have utilized drive-thru voting by invalidating their votes,” Hidalgo wrote to the governor. “If this were to come to pass, it would be an outrageous act of voter suppression.” 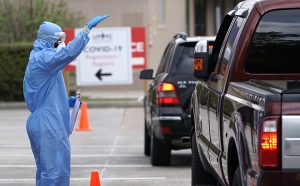