Here we go, the Houston Astros versus the Atlanta Braves for World Series glory. While this matchup would have been a reasonable prediction back in spring training, it was an unlikely scenario at the trade deadline on July 30, when the Braves had a 2% chance to represent the National League and superstar outfielder Ronald Acuna Jr. had been lost for the season with a torn ACL.

The Astros are in the World Series thanks to an offense that has scored 67 runs in 10 playoff games, with six of their seven wins coming by at least five runs. Forty-five of those 67 runs have come with two outs, a testament to a lineup that had the lowest strikeout rate in the majors in the regular season. The Braves are here after knocking off the powerful defending champion Dodgers in the National League Championship Series. Their 88 wins were the fewest of the 10 playoff teams — not including 2020, this is the first World Series without at least one 100-win team since 2015 (and the Rays and Dodgers were both on a 100-win pace last season) — but Atlanta has been a roll since early August.

Here’s your guide to the 2021 World Series, which starts Tuesday at Minute Maid Field in Houston:

What the Astros have on the line: Can a villain atone for previous sins? It happens in the movies, but this is baseball. It will take a long time before the Astros are viewed as anything but the sport’s outlaws, so instead of redemption they’ll seek history. After reaching their fifth straight league championship series — just the third franchise to do that — they now appear in their third World Series in five seasons. Along the way, they had seasons of 101, 103 and 107 wins. With a second championship in this run, one without an asterisk, they will cement a legacy as one of the best teams of all time. Carlos Correa, Jose Altuve, Alex Bregman and Yuli Gurriel are the core four who have been there all along. Altuve has won an MVP award, Altuve and Gurriel have won batting titles, Bregman has finished second in the MVP voting. With Correa heading into free agency, these could be their final games together — a final opportunity to secure their place as one of the greatest infields ever.

What the Braves have on the line: The opportunity to erase years of playoff failure. Greg Maddux, Tom Glavine and John Smoltz helped win the only World Series title in the franchise’s Atlanta era in 1995. The Braves have made 16 trips to the postseason since then without a championship. That includes 12 appearances since their last World Series berth in 1999. This is hardly the best Atlanta team in that stretch, but it has been clicking the past two-plus months. Remember, the Braves didn’t have a winning record until Aug. 6. Since then, including the playoffs, they’re 40-21, becoming just the fourth team to reach the World Series despite having a losing record at the All-Star break (joining the 1991 Braves, 1973 Mets and 1964 Cardinals). The 88 wins aren’t an impressive season total, but they dispatched the 95-win Brewers and 106-win Dodgers to get here.

What Dusty Baker has on the line: The Hall of Fame. The 72-year-old Astros manager is back in the World Series for the first time since his 2002 Giants lost to the Angels in seven games. It’s the longest span between World Series appearances since Bucky Harris was the player-manager for the Washington Senators in 1925 and then the manager for the Yankees in 1947. Baker is 12th in regular-season wins. The 11 managers ahead of him have all won a World Series and all except Bruce Bochy are in the Hall of Fame. Dusty’s managerial career has been filled with heartbreaking losses, mostly notably his Game 6 defeats with the Giants in that 2002 World Series and the Cubs in the 2003 NLCS. As the Astros wrapped up the ALCS with a 5-0 win in Game 6, he thought of those games. “Game 6 has been my nemesis in most playoffs and that’s what I was thinking,” Baker said after the victory. “I mean, you got to get past your nemesis. I was afraid of electricity when I was a kid, so now I’m an owner of an energy company. You try to get past things in your life.”

Except the Astros still need four more wins. If they can do it — and for Dusty’s sake, maybe they better do it in five games — Baker should start preparing his Cooperstown speech, a final reward for a remarkable professional baseball adventure that began in 1967. If that day arrives, let’s hope he gives the speech with a toothpick in his mouth while wearing his wristbands to wipe away the tears.

What Brian Snitker has on the line: The 66-year-old Atlanta manager hasn’t lived most of his baseball life in the headlines like Baker, but his story honors all those baseball lifers out there. He has been a member of the Braves organization since 1977. As a player, he reached Triple-A for two games. He began managing in the minors in 1982 and had been a loyal organization member for 40 years when the Braves first named him interim manager in 2016. They kept him in the job after he went 72-90 in his first full season in 2017, and he has since managed the club to four straight NL East titles.

When the Braves made the final out to eliminate the Dodgers, he thought of his wife, Ronnie, and his two kids. “I know that she’s been real emotional through a lot of this, and rightly so,” he said afterward. “She’s the one that drug our kids all over the Southeast and I would leave in February and come home in September and she would hold a job and cheerleading and baseball and all that and it was a lot of that stuff.” He also pointed out that the Snitker family is now guaranteed a World Series trophy: Son Troy is an assistant hitting coach for the Astros.

Neither Baker nor Snitker was hired for his analytics acumen and both hires went against the managerial trend of younger, recently retired players. Both, however, might be described best as baseball people, and were the right person for the job at the right time — Baker to help bring stability to the Astros after the cheating scandal rocked the organization, Snitker to help guide a young team out of a minor rebuilding project and into contention.

Don’t overlook what they’ve done this postseason, however. Both have adapted to the times. Baker has had quick hooks with his starters as needed and understands the importance of relying on a bullpen. Snitker used a bullpen game to win Game 4 of the NLCS, and his decision to hit for starter Ian Anderson in the bottom of the fourth in Game 6 proved to be one of the key moves of the postseason when Ehire Adrianza singled to set the stage for Eddie Rosario’s game-deciding three-run home run.

Eddie Rosario hits a big three-run home run to right field in the bottom of the fourth inning to give the Braves a 4-1 lead over the Dodgers.

Last call for Carlos Correa and Freddie Freeman? You can argue the Astros’ turnaround began when they drafted Correa with the first pick in the 2012 draft. He reached the majors in 2015 and the Astros made the playoffs that season, the first of six postseasons in Correa’s seven seasons with the team. Freeman is the face of the Atlanta franchise, one of the most popular players in the majors. Like Correa, he reached the majors when he was just 20 years old. He has been a five-time All-Star and won the 2020 NL MVP before finally reaching his first World Series.

After all the playoff disappointments through the years, Freeman described beating the Dodgers as “pure joy. It really is. … Usually we’re sitting in our locker, you know, and just like just thinking about the whole season and getting ready for next year, and we actually did it.”

Inside the Braves’ unexpected run 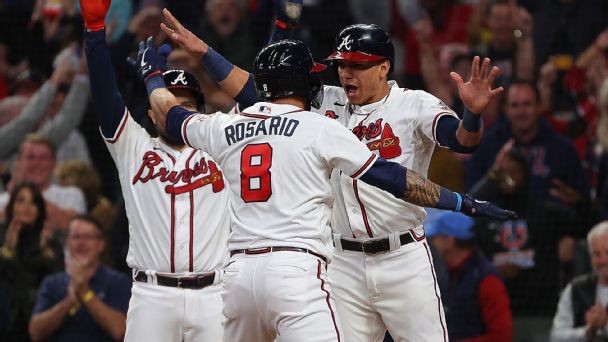 Atlanta went from playoff afterthought to representing the NL in the World Series in weeks. This is what you need to know.

Since Correa reached the majors, the two have been among the best players in the majors, Correa ranking sixth in Baseball-Reference WAR among position players, Freeman ninth.

Both players are set to become free agents after this World Series. It’s hard to imagine Freeman playing for another team given his stature with the Braves and his still high level of production at 32 years old, but any time a star player reaches free agency there is the risk of seeing him leave. Correa, on the other hand, is viewed as likely to leave the Astros — with perhaps the Yankees and Tigers leading the pursuit to sign him.

Relievers, relievers and more relievers: Heading into the World Series, relievers have thrown 54% of postseason innings. For the Astros, it’s been 57%, and for the Braves, 49%. So if you haven’t watched much postseason baseball this year, don’t be surprised to see the churn of relievers starting early in the game.

For Baker, the heavy relief usage was born out of necessity when Astros starters pitched a combined 6.2 innings in the first four games of the ALCS. It was a minor miracle the Astros were able to split those four games before Framber Valdez bounced back with eight dominant innings in Game 5 (the longest stint of any starter this postseason) and Luis Garcia tossed 5.2 scoreless innings in Game 6. Still, with Lance McCullers Jr. likely to miss the World Series after not pitching since leaving Game 4 of the ALDS with forearm discomfort, Baker will have to rely on his bullpen.

The Braves have used just three traditional starters in their playoff run, starting Charlie Morton on short rest in Game 4 against the Brewers and going with a bullpen game against the Dodgers in Game 4 of the NLCS (with Drew Smyly pitching 3.1 innings in relief as the long man).