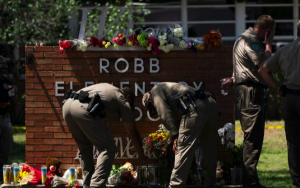 Before killing 19 children and two teachers in a Texas elementary school on Tuesday, the 18-year-old gunman wrote about his intentions on Facebook, according to Texas Gov. Greg Abbott.

In the first or three messages, about 30 minutes before the school shooting, Salvador Ramos wrote, “I’m going to shoot my grandmother.”
Shortly after, he wrote, “I shot my grandmother.”
And finally: “I’m going to shoot an elementary school.”
Those disturbing writings, Abbott said, came as the suspect indeed shot his grandmother, drove to nearby Robb Elementary School, forced his way inside adjoining classrooms and opened fire at a group of kids and faculty. Officers eventually forced their way into the barricaded room and a Border Patrol officer fatally shot him, Abbott said.
A spokesman for Meta, Facebook’s parent company, said the gunman’s messages were made in private one-to-one texts that were discovered after the shooting.
With 21 dead and 17 others injured, the attack was the deadliest school shooting in almost a decade and shook a nation still reeling from a mass shooting just 10 days ago.
Tuesday’s massacre is the second-deadliest school shooting since 2012, when 26 children and adults were killed at Sandy Hook Elementary School, and it was at least the 30th shooting at a K-12 school in 2022, according to a CNN tally.
Now, the city of Uvalde, about 90 miles west of San Antonio and just east of the US-Mexican border, finds itself on the long list of American communities devastated by mass shootings.
The gunman was a local high school dropout with no criminal history and no known mental health history, officials said. He had just turned 18 and legally bought two assault rifles and ammunition for his birthday. 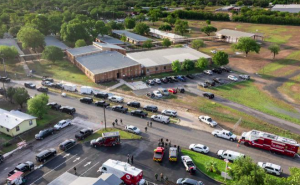 So far, four 10-year-olds and a fourth-grade teacher have been named publicly by relatives as among the dead.
Parents waited late into Tuesday night at a civic center to learn whether their children had survived, some having given DNA to help authorities identify victims, they told CNN. Authorities have since identified all the victims, whose remains have been removed from the murder scene, and notified their families, Texas Department of Public Safety Lt. Chris Olivarez said.
President Joe Biden in a national address Tuesday night recalled the Sandy Hook shooting, which happened when he was vice president.
“I had hoped when I became President I would not have to do this again,” he said. “How many scores of little children who witnessed what happened — see their friends die as if they’re in a battlefield, for God’s sake. They’ll live with it the rest of their lives.”
“To lose a child is like having a piece of your soul ripped away,” the President said, evoking his own experience losing two children.
Sympathy also poured in from across the globe, including Pope Francis, who pushed for stronger gun control. Leaders of France, Germany and Spain shared condolences, too, along with the President of war-torn Ukraine, who called it “terrible to have victims of shooters in peaceful time.”

How the shooting unfolded

The gunman in Uvalde, identified as Salvador Ramos by officials, shot his grandmother before driving to Robb Elementary, a 2nd through 4th grade school, to carry out the attack, per DPS. The grandmother was still alive and in a hospital Wednesday, Olivarez said.
Soon after that initial shooting, police got a 911 call about a vehicle that had crashed near the school and someone armed with a rifle heading inside, Olivarez told CNN in an interview Wednesday morning. The man was wearing a “tactical vest carrier with no ballistic panels,” Olivarez said.
The shooter then got into the building, where he barricaded himself inside adjoining classrooms and opened fire on the children and two teachers, Olivarez said, calling the act “complete evil.” 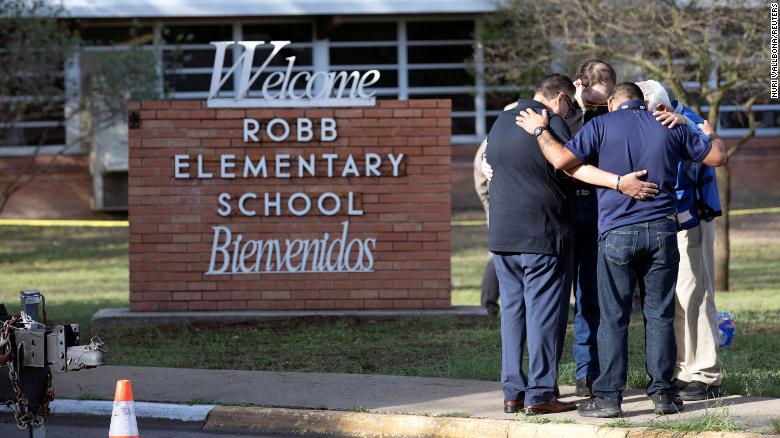 People gather Wednesday at Robb Elementary School.
With the shooter barricaded inside, officers were at a disadvantage, he said.
“There was not sufficient manpower at that time, and their primary focus was to preserve any further loss of life,” he told CNN. “They started breaking windows around the school and trying to rescue, evacuate children and teachers while that was going on.”
A specialized tactical team of local and federal officers arrived, forced its way into the classroom and shot the gunman dead, Olivarez said. One officer on the team was shot and injured and expected to survive.
Authorities continue to investigate the shooting and events that led to it, Olivarez told CNN.
“Right now we’re trying to provide further closure for the families by having a thorough investigation, trying to exactly identify what caused this mass shooting, what triggered this,” he said.

As the last day of school was drawing near, Robb Elementary students were celebrating with special themed dress days, including Tuesday’s theme of “Footloose and Fancy.” Students were encouraged to come dressed in nice outfits and show off their fun footwear, according to a post on the school’s Facebook page.
But by Tuesday afternoon, shaken students were being bused to the civic center-turned-reunification site. As the evening stretched on, some parents began to learn their young children had not survived.
“We see people coming out just terrorized. They’re crying one by one. They’re being told that their child has passed on,” state Sen. Roland Gutierrez told CNN Tuesday night from the site.
As news of the shooting broke in Uvalde, Robb Elementary parents were told students were being taken to the SSGT Willie de Leon Civic Center, according to a post on the school district’s Facebook page. The civic center quickly became the epicenter for families looking for their children, and scenes of devastation began to play out as victims were identified.
Parents were asked for DNA swabs to confirm their relationships to their children and instructed to wait an hour for an answer, at least four families told CNN.
A father, who had just learned his child was dead, fought tears as several of his cousins embraced him. A few yards away, a grandmother who had just driven from San Antonio said she would not stop praying for her 10-year-old granddaughter as they waited for the DNA results.
Inside, city workers handed out pizza, snacks and water to families. Some parents waited in silence, while others sobbed quietly as a group of children sat on the floor playing with teddy bears. A group of local pastors and chaplains arrived and offered their support to the families.
The school district canceled the rest of its school year, which was set to end Thursday, in response to the shooting, Superintendent Hal Harrell said. Grief counseling and support for students are available at the Uvalde civic center, the district said.
“It’s a small town,” said Lalo Diaz, a county justice of the peace. It’s the kind of place where everyone knows each other, Diaz said, noting he knows the families of several victims.
In his civic role, Diaz coordinates the processing of the deceased. Until now, he’s only dealt at once with four people killed in a car crash, he said. 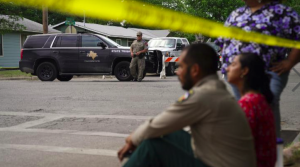 “When I have to sign 21 death certificates,” Diaz said, “my heart will drop.”
Robb Elementary includes second through fourth grades and had 535 students in the 2020-21 school year, state data shows. About 90% of students are Hispanic, and about 81% are economically disadvantaged, according to the data. Uvalde County had a population of about 25,000 in the 2020 census.
Hours after the shooting, people in the neighborhood surrounding the school sat with their families outside their homes, some gathering with neighbors seeking to understand what occurred just blocks away.
Adela Martinez and her husband Paul Martinez, a former city council member, could sense the grief and sadness spreading through their town, they said.
“We are like a big family here. You can expect something like this (shooting) in big cities like New York but in Uvalde? If this happened here, now I believe it can happen anywhere,” Adela Martinez said.

Four of the children and one teacher killed have been identified publicly by their families.
Ten-year-old Xavier Lopez’s mother confirmed her son was killed and recalled her fourth grader’s unforgettable smile. Xavier was days away from finishing elementary school and “couldn’t wait” to attend middle school, his mother told the Washington Post.
Martinez had been at the school earlier Tuesday to cheer on Xavier during the honor roll ceremony, at which he got a certificate. She took a picture of her boy and told him she was proud of him and loved him, she said. Then, she hugged her “mama’s boy” goodbye.
Elsewhere in the hours after the shooting, Angel Garza pleaded on Facebook for help finding his daughter, 10-year-old Amerie Jo Garza.
He followed up early Wednesday morning: “She’s been found. My little love is now flying high with the angels above.”
“Please don’t take a second for granted,” Garza wrote. “Hug your family. Tell them you love them.”
Jose Flores Jr., 10, was killed, as well, his father confirmed to CNN. The brother of two younger siblings, Jose loved baseball and video games and “was always full of energy,” Jose Flores Sr. said.
And 10-year-old Uziyah Garcia was among the slain, his family told CNN. The fourth-grader was “full of life” and “loved anything with wheels,” his uncle Mitch Renfro told CNN.
Uziyah’s grandfather remembered throwing the football with his grandson and teaching him pass patterns and plays, Manny Renfro recalled. He was the “sweetest little boy that I’ve ever known,” the grandfather said in an interview with CNN affiliate KSAT.
Fourth-grade teacher Eva Mireles was also killed, her aunt, Lydia Martinez Delgado, told CNN.
Mireles had been an educator for 17 years and in her off time enjoyed running, hiking, biking and spending time with her family, according to her profile on the Uvalde Consolidated Independent School District website.
COVID-19 News
Politics
Community
Immigration
LoneStar