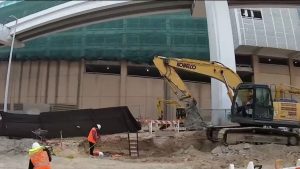 In August, U.S. Representative Troy Nehls told KPRC 2 Investigates he had questions over how the Mickey Leland International Terminal Program at Bush Intercontinental Airport was being managed by the Houston Airports System and its director Mario Diaz.

“I think there are some serious questions that we need to ask the FAA,” Nehls said.

Nehls is now taking action, expressing his “serious concerns” to the Federal Aviation Administration over the project that the airport and city officials call iTRP.

Nehls, who sits on the House Subcommittee on Aviation, wrote the head of the FAA last month with questions focused on a project that has taken over seven years to really get off the ground. Nehls also highlighted a project budget that has soared to as high as $1.7 billion before settling at $1.2 billion in 2019.

In April of that year, during a city council committee hearing, councilmember David Robinson asked Diaz if any more money was needed for the project.

Over the summer, KPRC 2 Investigates identified Diaz needing more money after all, with the new budget climbing up to $1.3 billion.

“I think there is an ongoing concern about spending related to this iTRP project,” said controller Chris Brown.

After learning of the letter sent by Nehls to the FAA, Brown weighed in on the request for a federal audit. Brown’s office had been critical of Diaz in the past.

Brown’s office has conducted multiple audits into the iTRP project and welcomes the feds coming in and taking a look at the books. Brown’s office said it will also assist federal officials with any requests they may have.

“We want to also make sure that the cost of this project doesn’t continue to escalate. We want to make sure we can contain that,” Brown said.

The bottom line for Nehls?

“An audit is the only way to restore public faith in the project and verify that PFC money is being properly used,” wrote Nehls.

PFC is Passenger Facility Charges, which passengers pay every time they fly out of the Houston Airport System.

“As a senior member of the Homeland Security Committee that oversees the FAA, I will continue to monitor this situation.” Jackson Lee wrote.

Diaz did not respond to KPRC 2 Investigates with a response to the request made by Nehls to the FAA.

Diaz has also been quiet for weeks in response to another investigation exposed by KPRC 2 Investigates involving an OIG complaint of sexual harassment and retaliation that includes Diaz and a subordinate he’s been in a cozy relationship with for years, Maricela Kruseman.

The Mayor’s office issued a statement claiming, “Since established in 2014, the project remains on budget and is currently forecasting an early completion in 2024.”

The city also adds an auditor by the controller in June of 2020 and 2021 said the “ITRP appears to run a very tight ship.” But in August, Brown was critical of a budget and project that has undergone a consistent change.

“This is the sixth budget reiteration of the budgeted amount. It’s grown to $1.3 billion after the full design of the project was in fact completed. So, the cost increased,” said Brown

The city also writes: “We have already contacted the regional office of the FAA with whom we meet regularly on a quarterly basis, and pledged to continue to cooperate with any request made by the local, regional, or federal FAA.

KPR2 Investigates did reach out to management at the FAA’s Airport District Office for the region as well as to their spokesperson for comment on the letter by Nehls. The FAA has yet to respond.