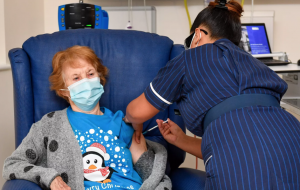 The U.K. rolled out the first coronavirus vaccines to the public on Tuesday, making it the first country to inoculate people with a treatment that went through full testing.

Margaret Keenan, who turns 91 next week, made history as the world’s first person to receive the Pfizer-BioNTech vaccine outside of trial conditions. The vaccine was approved by the U.K. drug regulator last week.

“I feel so privileged,” she said. “It’s the best early birthday present I could wish for because I can finally look forward to spending time with my family and friends in the New Year after being on my own for most of the year.”

An 81-year-old man named William Shakespeare became the second person to get the vaccine. He was inoculated in Coventry. “No, no, not nervous at all,” said Shakespeare, who lives in Warwickshire. “I’m very apprehensive about the side effects … but there’s a small chance of that.”

Now, the vaccine will be given to front-line health workers, nursing home workers, and those ages over 80, before it is given more widely among the U.K. population.

On the eve of the vaccine being rolled out, U.K. Prime Minister Boris Johnson said it was a “huge step forward” in the fight against the pandemic. It will be the country’s biggest vaccination drive ever.

Johnson’s sentiment was echoed by NHS England’s Chief Executive Simon Stevens, who said on Monday that it was a “decisive turning point in the battle against coronavirus.”

British newspapers, meanwhile, hailed it “V Day” and “Vaxit” (a play on “Brexit” — the other big news in the U.K. this week).

The rollout comes at a crucial time for the country; the U.K. has the third-highest number of coronavirus cases in Europe, after France and Italy, with over 1.7 million confirmed infections, and more than 61,000 deaths, data from Johns Hopkins University shows.

Fifty hospitals have been chosen to act as vaccine “hubs” in the U.K. and these will act as the primary place where the inoculations are administered. Later, the vaccine will be rolled out to community health centers, such as doctors’ surgeries, in order to facilitate a more general vaccination program, where the priority will depend on age and clinical need

Croydon University Hospital in London was one of the first hospitals to receive batches of the vaccine this weekend.

“Obviously I can’t hold them in my hands because they are minus 70 degrees, but to know that they are here and we are amongst the first in the country to actually receive the vaccine and therefore the first in the world is just amazing. I am so proud,” she said.

The U.K. preordered 40 million doses of Pfizer and BioNTech’s vaccine, which proved to be 95% effective at preventing Covid infection in late-stage clinical trials.

As it’s a two-dose vaccine, the country has bought enough doses to vaccinate 20 million people. Pfizer’s delivery of the vaccines will be staggered, with the total amount expected to have been delivered by the end of 2021.

Britain has also preordered other Covid-19 vaccines from AstraZeneca and Moderna, but these are yet to be granted approval.