Months of waiting for a COVID-19 vaccine to arrive in Houston are almost — but not quite — over, as hospitals prepare to move the first doses from sealed subzero shipments and into the arms of thousands of front-line health care workers this week.

About 19,500 doses of Pfizer’s vaccine will arrive Monday at four medical centers in Texas: MD Anderson Cancer Center in Houston, Methodist Dallas Medical Center, Wellness 360 at UT Health San Antonio, and UT Health Austin’s Dell Medical School, according to the Texas Department of State Health Services, which is overseeing deliveries of the first vaccine approved and shipped in the United States.

Another 75,075 doses will arrive at 19 additional sites on Tuesday, including seven in the Houston area. By midweek, 27 hospitals in the Houston region, most of the Texas Medical Center hospital system flagships or suburban campuses, will have received doses.

Officials on Sunday at some Houston hospitals compared it to waiting on an Amazon delivery: The package is confirmed, but the email with the tracking number and details hasn’t arrived. The first inoculations in Houston could happen in days, depending on when those shipments appear, said Dr. Marc Boom, president of Houston Methodist. 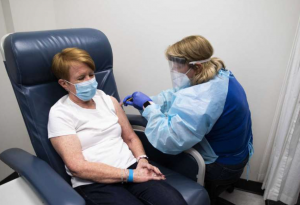