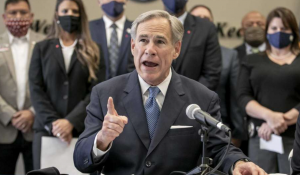 Gov. Greg Abbott’s controversial order to limit Texas counties to one mail-ballot drop-off site was allowed to remain in effect Saturday by the Texas Supreme Court.

The court blocked a previous appellate court ruling that had briefly struck down Abbott’s order, which was widely decried by voting rights groups as a voter-suppression tactic. The lawsuit to overturn Abbott’s order is still pending.

In Harris County, more than 1 million voters have cast ballots during early voting, shattering previous records. Multiple drop-off sites had been set up for voters until Abbott issued his order, which he said would “stop attempts at illegal voting.”

State District Judge Tim Sulak had previously ruled that Abbott’s order would “needlessly and unreasonably increase risks of exposure to COVID-19 infections” and undermine the constitutionally protected rights of residents to vote, “as a consequence of increased travel and delays, among other things.”