Texas is nearing 25,000 deaths during the coronavirus pandemic, the second-highest total in the country.

Cases of COVID-19 and virus-related hospitalizations continue to rise in the state. On Friday, the state reported 9,709 people hospitalized with the virus, an increase of nearly 22% over the last month.

One in every 262 people in Texas tested positive for the virus in the past week, according to researchers at Johns Hopkins University.

The increase in cases and hospitalizations comes as state health officials announced Friday that Texas will receive 620,000 more doses of COVID-19 vaccines over the next week.

More than 224,000 doses of the Pfizer vaccine have already been delivered in Texas. 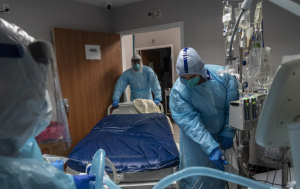 The new round of vaccines will go mainly to front-line health care workers and residents of long-term care facilities.

Dr. John Hellerstedt, the commissioner of the Texas Department of State Health Services, said much of the vaccine the state was expected to receive in the coming week would be the one developed by Moderna Inc., which was given approval by the U.S. Food and Drug Administration on Friday.

“Adding the Moderna vaccine will dramatically increase the amount of vaccine that can go to rural areas and smaller providers because it ships in smaller quantities and can be stored longer at regular refrigerator temperatures,” Hellerstedt said.

Gov. Greg Abbott has said he expects more than 1 million Texas residents will be vaccinated by the end of the month.

Meanwhile, officials in two Texas cities announced they have tested positive for COVID-19.

Port Arthur Mayor Thurman Bartie told he was being treated at a Houston-area hospital but that he was “feeling a little better.” He expected to remain hospitalized through the weekend.

The Fort Worth Police Department announced that Police Chief Ed Kraus was quarantined at home after testing positive and being asymptomatic.