Health officials in Austin are considering opening a makeshift hospital as its intensive care units fill up. Patients in North Texas are being treated in lobbies or in hallways. And hospitals around Laredo, Abilene, and College Station have three or fewer intensive care unit beds open, according to state data.

A week into the new year, hospitalizations in Texas have well-surpassed a deadly summer wave that overwhelmed health care workers in the Rio Grande Valley. Health experts have long warned of a dark winter — with a public tired of following safety precautions, a raging pandemic, and cold weather drawing people indoors where the virus can more easily spread. Add to that holiday gathering and increased levels of travel, which health officials say are already being reflected in the growing numbers of hospitalized coronavirus patients.

The dire figures come as two vaccines, produced in record time, have rolled out to health care workers in a massive undertaking so far beset by confusion and mishaps. The state has reported at least 28,545 fatalities tied to the virus, available intensive care unit beds are at a low and health experts say Texans can’t vaccinate their way out of the current surge. On Thursday, the first known case of a new and more contagious coronavirus strain was reported in Texas. 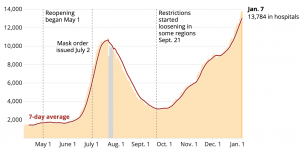 “Right now, probably half the patients I see never make it out of the waiting room… just because there’s physically no space, and when we do have space it’s limited — nurse staffing also is an issue,” said Dr. Robert Hancock, who works at hospitals in North Texas, Amarillo, and Oklahoma. “We’re doing the best we can, but it’s to a point where we’re not providing the care we’d like to.”

In Central Texas, Austin-area health officials forecast the region might run out of intensive care unit beds in the coming days and could start to set up a pop-up hospital as soon as this week. They erected a health facility in the Austin Convention Center as infections soared this summer, and a solicitation obtained by The Texas Tribune in June showed health officials were recruiting volunteers to “provide hands-on care to COVID + patients.” It never took in patients.

Some hospitals in North Texas are holding patients in emergency rooms that are not designed for long-term care because there’s no space in the intensive care units, said Hancock, who is president of the Texas College of Emergency Physicians. It’s nearly impossible to transfer a patient that needs more advanced or specialized care elsewhere — for those patients: “you’re out of luck. There’s nobody that’s going to accept you,” he said.

Hospitalizations lurched upward after Thanksgiving, worsened after Christmas and Hancock expect the situation will continue to deteriorate for the next month.

The hospitals are so crowded he is sometimes treating patients in the lobby and then discharging them because there are no available beds.

Around Fort Worth, some hospitals are running out of both intensive care unit beds and regular beds, said Dr. Justin Fairless, an emergency room doctor and an assistant professor of emergency medicine at a medical school in Fort Worth established by Texas Christian University and the University of North Texas Health Science Center.

At the two hospitals where he works, there are coronavirus patients in the hallway “because there’s nowhere else to put them,” and nursing staff who typically do administrative work are helping see patients, he said. Some health care workers who have the virus have returned to work because there’s not enough staff, he said. They are approved to do so under the Centers for Disease Control and Prevention guidance that permits it after symptoms have improved and a certain number of days have elapsed.

During Fairless’ shift Tuesday, patients were being treated in pockets of the hospital not normally used for patient care, like a pre-operation area used by health care workers performing an endoscopy. He sent several patients home that ordinarily would have been admitted to the hospital because of the possible risk that they’d be exposed to the coronavirus.

“We’re admitting patients into areas that don’t typically hold patients and on top of that,” he said, adding that some are being held in the emergency room for up to 48 hours because they “have nowhere else to go.”

The president of the Dallas-Fort Worth Hospital Council said hospitals in the area “have capacity issues, staffing issues and are anticipating another COVID-19 surge in late January.” Elsewhere, in Lubbock, hospitals are full, but the numbers have lessened since the area saw a crush of patients this fall.

Statewide, more than a dozen regions called Trauma Service Areas have surpassed a “high hospitalizations” marker that Gov. Greg Abbott set out, and that requires businesses there to scale back capacity to let fewer patrons in. Under Abbott’s order, the business limitations kick in in regions where hospitals are more than 15% full with coronavirus patients for seven-days. The number of people allowed into businesses is reduced from 75% occupancy to 50%, and open bars must close — though many have begun to sell more food to qualify as restaurants.

A Tribune analysis found those remedies set out by Abbott have done little to quash the virus in areas already seeing hospitals fill up.

In Harris County, which had to ratchet back business capacity under Abbott’s order earlier this week, Judge Lina Hidalgo said she was concerned the “threshold has not yielded the necessary change in other areas.”

“Reaching the threshold — activating the rollbacks — doesn’t in and of itself change the trajectory. That’s something that’s in all of our hands,” Hidalgo said.

In the Austin and Travis County area, where there’s been a 160% increase in new hospital admissions since December, Escott said he doesn’t think that “rollback to 50% occupancy at retail and restaurants is doing the trick.”

“I think it was forward-thinking to set those benchmarks, but I think we have to assess the situation and identify whether or not the strategy is working or not — it’s clearly not working,” he said.

Local officials there, he added, have “reached the limits of what we can do under state law, and under the executive orders.”

Abbott’s mandates have barred local officials from taking more aggressive actions, and over the holidays he took aim at an Austin-area curfew that tried to ban late-night dine-in and beverage service for a few days to lessen the virus’ spread.

A spokesperson for Abbott said local officials have “abdicated their authority and refused to enforce existing protocols” by leaving violations unpunished, “further endangering the health and well-being of Texans.”

“Increased restrictions will do nothing to mitigate COVID-19 and protect communities without enforcement,” said spokesperson Renae Eze. “And even states with increased restrictions and lockdowns throughout the pandemic have done little to mitigate the virus, such as California and Rhode Island, which have the highest COVID-19 infection rates per capita in the world, and New York, which is leading the nation in COVID-19 deaths.”

In the meantime, hospitals in parts of the state are full of patients, and vaccine doses are being gradually doled out to health care workers and other vulnerable groups.

Fairless, the emergency room doctor, said the hospital was becoming a more and more “unsafe environment” and was excited to get a second dose of a Pfizer vaccine Wednesday. Driving to the hospital, he said: “I can guarantee I’m going to see the parking lot totally full of people.”

“I’ve gone through H1N1 and all the other flu pandemics,” he added. “I’ve never really seen it this busy — especially at these smaller hospitals.”