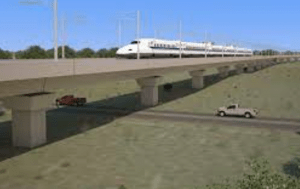 Texas Central, the developers behind the proposed high-speed rail project between Dallas and Houston, could be one step closer to groundbreaking. Officials announced on June 15 they have signed a $16 billion contract with Webuild, a global engineering and construction company, to lead the civil construction team that will build the train.

According to a news release, Webuild, formerly Salini Impregilo, has constructed 8,500 miles of railway and metro infrastructure in Australia, Europe, Asia, and the Americas. The company has operated in the U.S. market since the 1980s and expanded its presence in 2016 through a merger with The Lane Construction Corp.

“Our goal is to put together a team of the best players in the world from each industry needed to bring this project to life. The addition of Webuild helps us accomplish that goal,” Texas Central CEOCarlos Aguilar said in a statement.

Webuild will execute the heavy construction for the project, including the design and build of all 236 miles of the alignment, about half of which will be on a viaduct.

The video above is from a 2020 report that provides an update on the decade-long journey to have a high-speed railway built between Houston and Dallas.

Officials said much of the alignment is elevated to reduce the effects on landowners and residents living along the route as much as possible. They also said the train system will provide a “safe, reliable, green and productive” travel option.

But organizations including ReRoute the Route and Texans Against High-Speed Rail have advocated against the project as currently proposed due to safety concerns, the loss of private property, environmental effects, and financial feasibility, among other issues.

Texas Central signed a design-build agreement with Salini Impregilo and Lane Construction in September 2019-when the project was estimated to cost $14 billion.

Officials said the 200 mph train system would get passengers from Dallas to Houston and vice versa in 90 minutes. A midway stop would be in the Brazos Valley area.

The project, according to the release, will create about 17,000 direct jobs during the six-year construction process in addition to 20,000 supply chain jobs and more than 1,400 permanent jobs once the train is operational. Officials said the project will have an estimated $36 billion economic impact over the next 25 years.

Officials did not immediately respond to follow-up inquiries from Community Impact Newspaper about the current projected construction start date, although Texas Central’s website states construction could start in 2021.