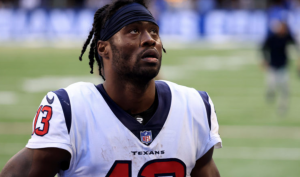 The Houston Texans are the latest team to have Week 16 derailed by cases of COVID-19. On Wednesday, the organization revealed that one of its top offensive players tested positive for the virus.

According to an announcement from the Texans, wide receiver Brandin Cooks was placed on the reserve/COVID-19 list on Wednesday afternoon. The designation will make it much more difficult for the veteran pass-catcher to get on the field for Houston’s game this week against the Los Angeles Chargers.

Under the league’s health and safety protocols, Cooks will have a chance to return this weekend, but he’ll need to make a quick turnaround to be ready to play by Sunday.

Cooks has been the sole bright spot for a Texans offense that’s struggled to have much if any, success this season. Playing in all 14 games so far this year, the 28-year-old veteran has caught 80 passes for 945 yards and five touchdowns.

He leads Houston in all three major receiving categories and by quite a large margin in receptions and yards.

Cooks wasn’t the only player in Houston to land on the list in the middle of Week 16. Kicker Ka’imi Fairbairn and linebacker Eric Wilson also received the designation.

NFL Network’s Ian Rapoport reports that Texans coach David Culley said last week that Wilson is the team’s only unvaccinated player. That means he’s guaranteed to be out on Sunday, while Cooks and Fairbairn still have a chance to play.

The Texans will hope to get an answer soon before they welcome in the Chargers to Houston on Sunday for a 1 p.m. ET kickoff.