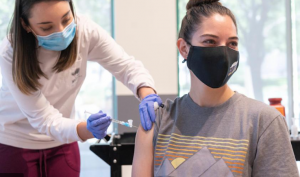 U.S. businesses are giving a mixed reception to President Biden’s COVID-19 vaccination mandate for firms with 100 or more employees, with many larger companies or their trade groups welcoming the directive even as smaller businesses are bristling.

Some companies say the order imposes yet another burden that could intensify historic worker shortages and supply-chain bottlenecks.

Meanwhile, details such as precisely how the plan will be carried out and who bears the costs will likely remain unclear until the Occupational Safety and Health Administration issues an “emergency temporary standard” that will implement the requirement, legal experts say.

The order is expected to cover about 80 million private-sector workers and the vast majority of about 4 million federal workers.

On Thursday, Biden ordered firms with 100 or more employees to ensure their workers are vaccinated or tested at least weekly for COVID-19. A separate executive order will require vaccinations for federal workers in the executive branch and contractors.

Many large companies are taking the mandate in stride because they already were putting in place their own vaccine policies or strongly considering doing so, says Kathryn Bakich, health compliance practice leader at Segal, an employee benefits consulting firm.

A handful of corporate giants such as United Airlines, McDonald’s, and Walt Disney imposed employee vaccination mandates on some or all of their workers in the spring. In turn, other large and midsize firms followed with similar policies this summer or moved to seriously consider them.

“I don’t think there’s anybody that’s not talking about it” says Bakich, whose clients are generally large companies.

“Business Roundtable welcomes the Biden Administration’s continued vigilance in the fight against COVID,” the group, which represents the nation’s leading companies, said in a statement. “Over the past several weeks many companies have decided to implement a vaccine mandate for some or all of their employees, a decision we applaud.”

Providing employers with ‘some cover’

Many companies that were reluctant to impose a vaccine requirement that may be unpopular with some staffers likely welcome Biden’s order, says Karla Grossenbacher, head of the labor and employment practice for Seyfarth Shaw in Washington D.C.

“This will provide employers with some cover,” she says.

Yet big firms with hundreds or thousands of employees “will have an easier time complying because they have the large human resources departments to ensure employees are vaccinated or tested weekly, says James Sullivan, co-chair of law firm Cozen O’Connor’s OSHA-workplace safety practice group.

“Many smaller employers aren’t equipped” to deal with those logistics, he adds, and will have to bear the expense of giving employees paid time off to get vaccinated or recover from the shot, as Biden’s order requires.

Mehtab Bhogal, co-CEO of Forever Floral, which sells handcrafted, artificial floral bouquets online, says he doesn’t have the HR staff to deal with the vaccination or testing of his 130 employees.

“It will eat up time and time is money,” he says, reckoning the tasks will consume 150 to 200 hours for his chief operating officer and production manager.

Bhogal says he’s already struggling to attract and hold onto employees because of the worker shortages, and the mandate will intensify those strains. He notes the company is based in Ogden, Utah, a conservative area that tends to view federal mandates warily.

“I assume I’ll lose 30% of my workforce,” he says. He says he also can’t absorb the cost of weekly testing and likely would only hire vaccinated job candidates.

“It feels like (the government) is kind of making employers do their dirty work so they avoid liability,” Bhogal adds. “It’s creating a lot of unnecessary headaches for us.”

“We are a healthcare service provider and it is important for us to lead by example,” he says. “Watching the President speak on the mandates made my team proud. It confirmed we are putting humanity first.”

The order could have a mixed effect on the nation’s worker shortages.

If a firm establishes its own vaccination requirement, employees who don’t want to get vaccinated could leave for a competitor. A federal mandate could limit such turnover because it’s imposed on all businesses with at least 100 employees.

“The administration’s approach will help equalize the playing field and take some pressure off employers who have been concerned about moving too fast or too early in this important area,” says Devjani Mishra, a leader of Littler Mendelson’s COVID-19 task force.

On the other hand, Biden’s plan could worsen the turnover problem if it prompts employees at companies with more than 100 workers to leave for smaller firms, Grossenbacher says.

Meanwhile, other details specifying how the mandate will be achieved are fuzzy, Grossenbacher says.

Will companies have to report vaccination and testing results to OSHA or simply keep track of them and possibly face an audit?

Who will bear the cost of testing — businesses or employees?

If a company fails to ensure its employees are vaccinated or tested, would it face greater legal liability if a worker gets stick?

It could, Grossenbacher and Sullivan say, though the OSHA order will likely more clearly spell out all of such issues.