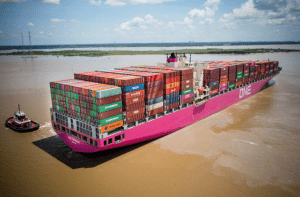 Port Houston continues to make waves with another month of double-digit container cargo increases through the Houston Ship Channel and its best May ever for container TEUs.

This comes after a record-breaking 2020 for TEUs through Port Houston. In 2020 Port Houston surpassed the 3 million TEU mark for the first time, with a total of 3,001,164 TEUs for the year.

General cargo also saw gains this month, contributing to a total tonnage increase of 8% this May over last. Steel imports, auto imports, and bagged goods imports were all up compared to Page 2 of 2 the same month last year. Notably, commodities like lumber, machinery, plywood, and bagged foods increased, indicating a comeback of industries hard hit by the pandemic.

Continued growth in cargo into Port Houston is expected, particularly containerized cargo. The new EC6 service from THE Alliance & Evergreen made its maiden call this week at Barbours Cut Container Terminal and will connect Taiwan, China, Hong Kong, and Korea to Houston. This new service into Port Houston represents increasing demand for Asia imports in Texas.