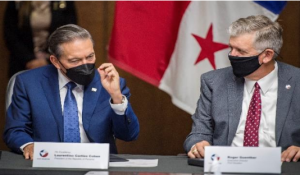 Mr. Laurentino Cortizo Cohen, President of the Republic of Panama, made a historic visit to Port Houston on Thursday, highlighting the importance of the connection between the Panama Canal and the Houston Ship Channel. The country of Panama is home to the Panama Canal. The 2016 expansion of the canal helped open new business opportunities and spurred the growth of Asia trade for Houston.

Last year Houston was ranked the #1 U.S. port in total tonnage, and import containers from East Asia have grown 63%, and export containers have increased 96% since 2016. “Unquestionably, the expansion of the Panama Canal has had a significant role in the growth of cargo volume and the number of larger ships and vessels calling our port,” Executive Director Roger Guenther remarked.

“That’s why we must continue to make strides with the expansion of the Houston Ship Channel – Project 11 to ensure that we can accommodate the larger ships and vessels, which means more jobs and greater economic impact to our region.”

Port Houston welcomed the President with a Memorandum of Understanding recognizing the importance of the relationship between the Panama Canal Authority and the Houston Ship Channel.

The President also received a briefing that highlighted Houston Ship Channel business and the efforts of Port Houston, advocating Project 11, the Houston Ship Channel expansion program, which supports the widening and deepening of the 52-mile-long federal waterway and its continued maintenance.