Few performances are more synonymous with a New York City Christmas than The Nutcracker.

Set to the soul-stirring music of Peter Ilyitch Tschaikovsky, performed by the New York City Ballet (NYCB), George Balanchine’s The Nutcracker will be available for streaming from December 11th through January 3rd, via a partnership between NYCB and Marquee TV. Marquee is an on-demand streaming platform dedicated to global arts and culture. Tickets are $25. You do not need a subscription nor to buy one for Marquee to purchase a ticket.

“Each year New York City Ballet’s live performances of George Balanchine’s The Nutcracker® provide a vital introduction to ballet for countless children who attend performances with their families, or attend special matinees for students from New York City’s public schools,” said Katherine Brown, Executive Director of NYCB, in a press release, which shared the following history:

NYCB’s landmark version of the Balanchine favorite, which The New York Times has called ‘the gold standard’ Nutcracker, premiered on February 2, 1954, and helped to establish The Nutcracker and its score as perennial favorites in the United States. A signature event of the holiday season in New York City, with the exception of the 2020 season when performances were canceled due to the ongoing COVID-19 pandemic, the treasured classic had been performed by NYCB every year since its premiere more than 65 years ago.

Filmed during the Company’s 2019 season at the David H. Koch Theater at Lincoln Center, the Marquee TV broadcast features NYCB Principal Dancers Maria Kowroski as the Sugarplum Fairy, Tyler Angle as Her Cavalier, Megan Fairchild as Dewdrop, and more than 50 dancers from NYCB, the largest dance organization in America and one of the world’s greatest ballet companies. The production also features the 62-piece New York City Ballet Orchestra under the direction of NYCB Music Director Andrew Litton, and more than 60 children from the School of American Ballet, the official school of NYCB.

You can purchase a ticket to The Nutcracker at marquee.tv/nycbnutcracker, or through in-app purchase via Apple and Android devices. This will allow you to enjoy the performance on all of Marquee TV’s apps, including browser, iOS, Apple TV, Android TV, Android, Fire TV, Roku, and the soon-to-be-released Samsung app. You can start the performance at your own convenience from December 11th to January 3, and have 48 hours to finish watching after the first play. Marquee TV’s apps also include AirPlay and Chromecast support. 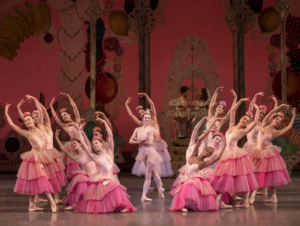