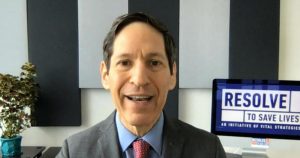 From coast-to-coast coronavirus cases are climbing.

The US has added nearly half a million new cases over the past week, and about three-quarters of the states are trending in the wrong direction.

“We’re failing. COVID has the upper hand, cases are increasing in most of the country,” said Dr. Tom Frieden, former CDC director.

At nearly 70,000 cases per day data from Johns Hopkins University shows, the seven-day average of new cases is now at the highest levels since the pandemic began.

“Following the case increase, are hospitalization increases, and tragically further increases in the number of deaths,” said Frieden.

Brett Giroir, assistant secretary for health at the US Department of Health and Human Services also weighed in on the issue.

“Testing may be identifying some more cases, I think that’s clearly true, but what we’re seeing is a real increase in the numbers,” said Giroir.

Just look at the data on display in El Paso where hospitals are reaching a breaking point.

“We got four pressurized tents set up at hospitals for overflow and we are looking at an alternate care site at our convention center,” said El Paso Mayor, Dee Margo.

With hospitalizations on the rise across the country, officials from New Jersey to Colorado to Illinois are reinstating restrictions on bars, restaurants and gatherings, as well as curfews.

In Chicago, the city is now averaging twice as many COVID related hospital admissions per day than it was one month ago. The ban on indoor dining there begins this Friday.