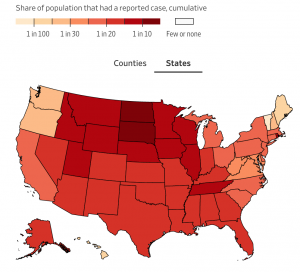 The U.S. added nearly 200,000 newly reported Covid-19 cases, and set a record for hospitalizations for the 10th day in a row, as the rollout of one vaccine expanded across the country and another looked set for approval.

The nation reported more than 198,000 new cases for Tuesday, according to data compiled by Johns Hopkins University, up from Monday’s 192,805 but down from the record 233,133 reported for Friday. It was also lower than the 219,772 cases reported a week earlier on Dec. 8.

The number of cases reported each day tends to be lower at the beginning of the week and rise toward the end of the week, as fewer people are tested over the weekend.

There were 112,816 people hospitalized with the disease on Tuesday, according to the Covid Tracking Project, the 10th record-high day in a row. That included a record-high 21,897 in intensive care.

Also on Tuesday, more U.S. hospitals began receiving shipments of the Covid-19 vaccine developed by Pfizer and BioNTech. Pfizer and logistics companies continued distribution of the two-dose vaccine, as they worked to meet the government’s goal of distributing millions of doses to 636 sites across the country by Wednesday. About 2.9 million doses are set to be delivered by the end of the weekend to more than 1,000 locations.

In addition, the Food and Drug Administration said the Covid-19 vaccine developed by Moderna is “highly effective,” suggesting the vaccine could soon be added to the arsenal against the pandemic. The findings from Moderna and the FDA will go before an independent panel on Thursday. The second major U.S. coronavirus vaccine could be shipped by this weekend.

While vaccines are rolled out, states continue to grapple with rising numbers of patients and fatalities. California, which has logged more than 1.65 million cases in total, the most of any state, reported 33,249 for Tuesday, according to Johns Hopkins data. It reported its second-highest number of deaths in a day, with 276, just lower than the record-high 278 deaths reported for Aug. 14,

California Gov. Gavin Newsom said Tuesday that the state was preparing for a surge in deaths. Among other measures, Mr. Newsom said the state has stockpiled 5,000 more body bags, stationed 60 refrigerated storage containers, and activated a mutual aid system for the county coroners.