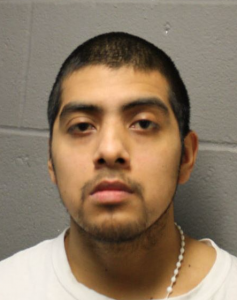 An MS-13 gang member, who drove a witness who was cooperating with police to a park to be gunned down by other gang members, has been sentenced to life in prison after pleading guilty to murder, Harris County District Attorney Kim Ogg announced Saturday.

“Gang violence is an insidious and treacherous cycle of brutality and is particularly heinous when a cooperating witness is killed,” Ogg said. “It will never have a place in our city or county.”

Luis Gonzalez Cruz, 26, was facing life in prison without parole if convicted of capital murder in the slaying of Estuar Quinones in June 2016.

On Friday, Gonzalez pleaded guilty to murder in exchange for life in prison. He admitted to driving 16-year-old Quinones to his death and participating in the shooting, after it was discovered that the teenager had agreed to testify against other gang members who were in jail facing charges in an earlier murder.

As he sat on a park bench in Buffalo Run Park in Missouri City, Quinones was shot more than 15 times by several gang members, including Gonzalez, to ensure that he would never talk.

MS-13 is ranked by the Texas Department of Public Safety as a Tier 1 gang, in the same classification of The Texas Syndicate, Texas Mexican Mafia and Tango Blast. It originated in Los Angeles and thrives in El Salvador and is known for extreme violence.