State Health Officer Dr. Thomas Dobbs and State Epidemiologist Dr. Paul Byers were among the first in the state to receive a recently approved COVID-19 vaccine, receiving the shots during a news conference Monday.

Dobbs, Byers, and other health officials have given pharmaceutical company Pfizer’s vaccine, which already is being distributed to hundreds of providers across the state.

“It’s a big day,” Dobbs said. “We are extremely excited to have a vaccine that is not only extremely effective based on the clinical studies but also seems to have a very favorable side-effect profile. We know how deadly, devastating, and disruptive coronavirus has been for the state of Mississippi.”

The vaccine received emergency use authorization in the U.S. from the Food and Drug Administration Friday.

Dobbs took the vaccine in front of a virtual audience Monday as a show of confidence in the vaccine’s effectiveness and to encourage others to do the same. Mississippi has seen a significant rise in cases over the past several weeks, due in large part to holiday gatherings. Dobbs has recently advocated more strongly for several health guidelines, including wearing facial coverings and social distancing, as cases have increased not only in the state but across the country.

Several other healthcare professionals and organizations in the U.S. also highly publicized their employees being immunized, underscoring its importance and attempting to dispel widespread fears.

Which hospitals are getting the vaccines in Mississippi?

Vaccines began shipping over the weekend to hospitals across the nation and frontline healthcare workers will be the first to receive them. Dobbs said two medical centers in the state have already received their allocations of the vaccine. All Mississippi hospitals will eventually receive an allotment, he said, but when they will receive them will be based on availability.

Marc Rolph, director of communications and marketing for the University of Mississippi Medical Center, said the network received 780 vials of the vaccine — enough for 3,900 doses — on Monday. The hospital anticipates it will begin vaccinating its employees using a tiered system on Wednesday.

More facilities will receive their allocations Tuesday and Wednesday. Dobbs said that five medical centers in the state have the equipment required to store the vaccine on-site, but declined to name them, citing safety and security reasons. Other medical centers and rural hospitals in the state will receive the vaccine through the health department with their partnership with UMMC, he said.

Although critical healthcare workers will be the first to be eligible to receive the vaccinations in Mississippi, taking them will not be mandatory. Dobbs has said he does not anticipate a state mandate requiring the vaccination, but private companies could require them as a condition of employment.

On Monday, some long-term care facilities in the state also began vaccinating their staff and residents, he said.

“The vaccines won’t be in arms immediately, but we have gotten word from our (Centers for Disease Control and Prevention) partners that we have enough to kick it off,” Dobbs said.

Byers added that once more allotments make it to the state, there will be enough doses to vaccinate every staff member and resident in those facilities across Mississippi.

A vaccine from Massachusetts-based Moderna is set to be reviewed for emergency use authorization by the FDA on Thursday. Byers said the health department currently estimates it will receive 50,000 doses of that vaccine when it is approved, but those numbers are not yet finalized.

Once more doses are available in the state, some healthcare workers will be able to receive vaccinations through drive-thru locations already being used for testing. Jim Craig, the senior deputy and director of the health department’s office of health protection, said this may begin in January. 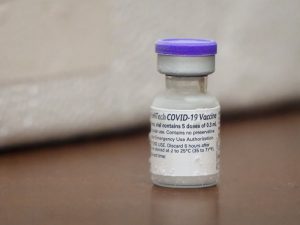