Millions of Americans are expected to travel for the holiday this week despite the CDC’s warning to stay home this Thanksgiving.

The TSA said more than two million people were screened at U.S. airports this past weekend despite the CDC’s warning against traveling for the holiday.

Still, AAA is projecting less than 50-million Americans will travel for Thanksgiving. That represents at least a 10 percent drop from last year, which would be the largest one-year drop since the 2008 recession.

Many airlines have emphasized what they’re doing to stay safe like sanitizing gates and kiosks and trying to shorten lines and gatherings as well as purify the air.

Most airlines won’t pay cash to refund a flight, but many are waiving fees and offering vouchers.

The Maine CDC says we’ve got to update our understanding of the pandemic in our current environment and remain vigilant this holiday season.

“The world is so much different than what it was just a year ago. Holiday safety means something much different this year than it did last year. Everything has changed,” said Maine CDC Director Dr. Nirav Shah.

If you are flying for the holiday, in addition to following CDC guidelines, AAA recommends checking your destination and any hotels or car rentals for specific safety protocols.

Even if you take precautions when flying, Dr. Anthony Fauci said over the weekend he’s worried that Thanksgiving crowds at airports this week could lead to another surge in coronavirus cases.

“As we’re getting into the colder season, particularly the situation with the holiday season where you see people traveling, you see the clips on TV, people at airports — I mean, those are the things that we’ve got to realize are going to get us in even more trouble than we’re in right now,” said Dr. Fauci. 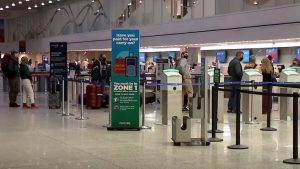