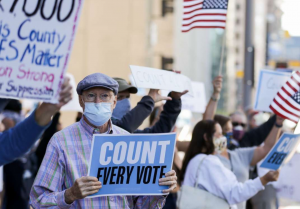 The latest ruling in the ongoing court battle over drive-thru voting came after a two-hour hearing in a Houston federal court, where Republicans sought to toss the ballots, saying the sites are less secure than in-person polling sites. In his ruling, Hanen said, “I ain’t buying that.”

Hanen, an appointee of George W. Bush, also said if he did find the GOP had standing, he would likely halt drive-thru voting on Election Day.

Earlier Monday morning, reporters were told there wasn’t enough room in the courtroom for the hearing because of COVID-19 restrictions, and a conference call line set up to allow reporters to listen in stopped functioning before the hearing started. Eventually some reporters gained access.

Hanen was expected to hear from Republicans, including Houston activist Steve Hotze, state Rep. Steve Toth, R-The Woodlands, Wendell Champion, a candidate for the 18th Congressional District, and Sharon Hemphill, who is running for election for judge of the Texas 80th District Court. They argue that drive-thru voting is not permitted under the Texas Election Code.

The state Supreme Court on Sunday declined to hear a similar case, and rejected a similar challenge to drive-thru voting from Republicans on Oct. 22.

Richard Mithoff, who is representing Harris County, argued this morning that Purcell Supreme Court precedent should guide here, that federal courts should not intervene in election case when the election is already underway.

Jared Woodfill, who is representing the plaintiffs, argued that the Texas Election Code does not allow the drive-thru option. He said the Legislature installed “prophylactic measures” to protect ballot security that do not include drive-thru voting. Those measures include curbside voting for the disabled and  elderly.

Woodfill accused Hollins of using pandemic as excuse to invent a new, illegal form of voting.

Hanen pushed back against Purcell, asking “if you know they are voting illegally, shouldn’t the court do something?”

Dozens of protesters congregated outside the downtown federal courthouse on Monday awaiting the court’s decision, chanting “count every vote.”

Protester Adrien Moshenberg said she voted in a drive-thru location and was dismayed to hear her vote might not count. She voted Joe Biden at the top of the ticket, but said she is not a straight-party voter.

“Some of the people that I voted for are actually the people trying to take away my vote and if I’m given the chance to cast a provisional ballot tomorrow, I won’t make that mistake again,” she said. 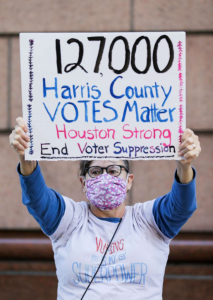 “All this is is a strategy by a few extremists to sow chaos headed into the 2020 election,” he said. “Those people voted in good faith.”

One of those people was Maria Canales, 40, who said she has dealt with voter suppression tactics as a Latina.

“This felt like one more time at a critical point,” she said.

U.S. Congresswoman Sylvia Garcia called it “silly” that anyone would try to invalidate the drive-thru votes.

“When you set up a process, you plan it, you vet it,” she said. “I think sometimes when people are desperate and they see they’re losing, they do things like this.”

Hollins said the drive-thru option, which Harris County launched this year, is legal and was approved by the Secretary of State’s office. In court filings, the county has noted that its election plans have been public since August, and only after voting started in October did the Republicans file suit.

Attorney General Ken Paxton issued an opinion in October stating that drive-thru voting was not legal.

County Judge Lina Hidalgo on Sunday said tossing the drive-thru ballots would be “an outrageous act of voter suppression.”

During the early vote period, 126,988 people voted at the county’s 10 drive-thru sites, 9 percent of the total.

In a ranking of the precincts that produced the most drive-thru votes, the top half of these precincts accounted for 88 percent of these ballots. Clinton won 59 percent support in these precincts, well above her countywide performance.

The trend was even more pronounced in the top quarter of precincts that produced the most drive-thru votes, in which Clinton earned 67 percent of the vote. The bottom half of drive-thru-vote precincts accounted for less than 12 percent of these ballots. There President Donald Trump in 2016 and Republican U.S. Senate candidate Ted Cruz won by slim majorities, slightly above 50 percent, though losing the county badly.