Earl Sprunger sits in his hospital bed, struggling to speak. He anxiously strokes his long, scraggly goatee every time he winces in pain. He’d hoped to shave it off before coming to the hospital, but there wasn’t time.

The 67-year-old originally showed up here, at Houston Methodist The Woodlands Hospital, when an existing stomach issue flared up so badly he couldn’t stand. He tested positive for COVID and was admitted.

“These other problems I already had, but I didn’t know it was that bad. [My surgeon] believes COVID brought them on, like that,” he said, snapping his fingers.

Sprunger has been here, in the hospital’s respiratory unit, for a week now, with only his nurses and a Christian YouTube channel for company. His daughter, a mail carrier, has been nervous to visit. Sprunger, a retired veteran, is working on getting his strength back, taking slow, supervised walks around the room with the help of a walker.

All 32 beds in this unit are full with COVID patients right now, and the hospital has reopened the overflow unit. Almost all of the patients, like Sprunger, are unvaccinated. 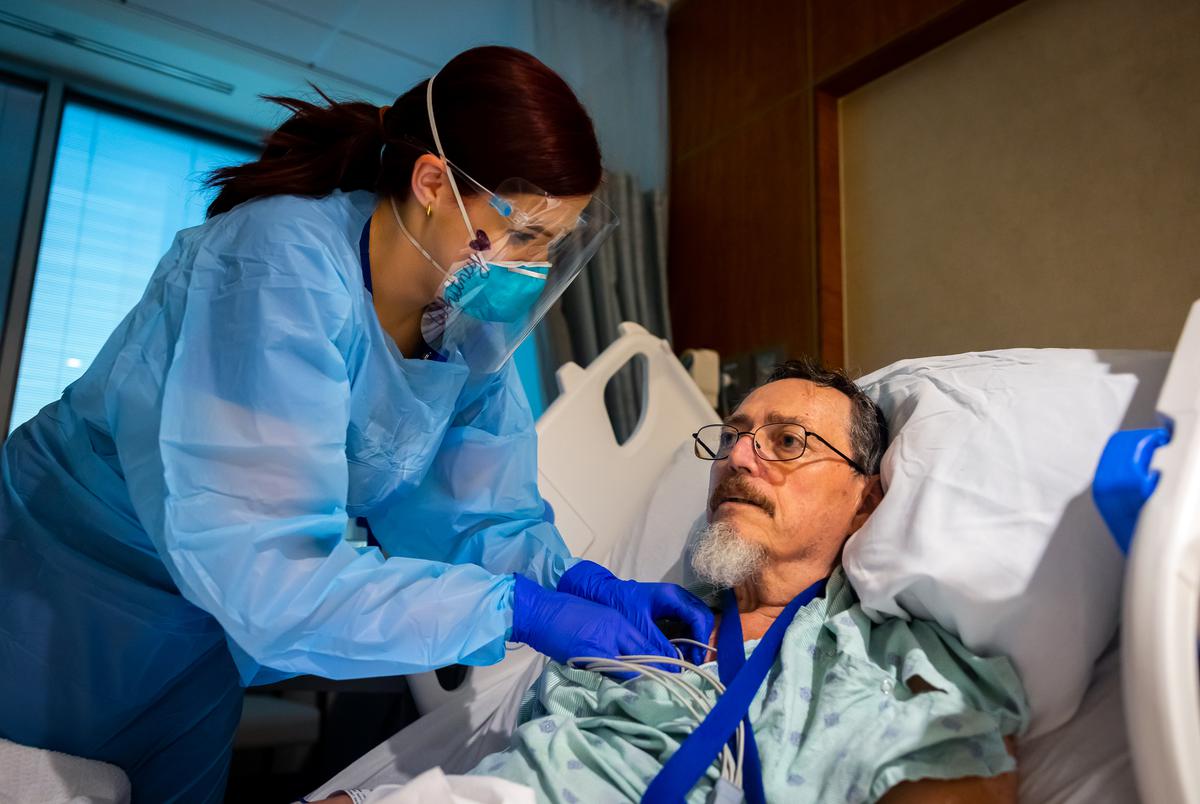 Whitney Thiry, a respiratory unit nurse, checks on patient Earl Sprunger, 67, while he is being treated for COVID-19. Credit: Annie Mulligan for The Texas Tribune

“I don’t do vaccines too much really,” he said. “Years ago, they gave me the vaccine for flu or whatever it was. It gave me the flu bad, real bad…so it makes me leery about that stuff now.”

Sprunger says there haven’t been enough studies about the coronavirus vaccines and he’s worried about the side effects. His brother, who got vaccinated and boosted, is hospitalized in Michigan right now, he says, and Sprunger believes the vaccine made him worse, not better.

If unvaccinated people do get sick from this new, highly contagious COVID variant, Sprunger says they can just do what he did.

That’s hard for nurse and unit manager Kristen McLaury to hear, considering just how many of her patients haven’t gotten through it.

McLaury treated one of the hospital’s first COVID patients and hasn’t stopped since. She now runs the respiratory unit, where she and her nurses have watched otherwise healthy young people gasping for breath. They’ve put countless people on oxygen, or taken them off life-support. They’ve had to comfort grieving families, and facilitate video calls so no one had to die alone.

She’s risked her own life on the frontlines for nearly two years, and now, watching these hospital beds fill up again, she just feels defeated. In Montgomery County, a conservative, wealthy suburban county northwest of Houston, only 53 percent of its more than 600,000 residents are vaccinated, which is among the lowest rates for Texas counties with populations exceeding 500,000. Less than 16 percent of residents have received a booster shot.

“I work 60 hours a week and I don’t see my child, I don’t see my husband so that I can come and care for you while you yell at me because you’re upset that you have a disease that I told you how to prevent in the first place,” McLaury said.

As the unit manager, it’s McLaury’s job to keep morale up among the other nurses, a herculean task right now. Like every hospital across the country, they’re facing a nursing shortage, an increase in employee infections, and a potentially terminal case of staff burnout.

As the omicron variant surges, Texas is on track to soon surpass its previous COVID hospitalization record, set in January 2021. Then, at least, there was the hope of vaccines on the horizon. Now, nurses like McLaury don’t see much hope at all.

From behind her Houston Astros mask and face shield, she begins to cry.

“It’s real, and maybe it might not be you [in the hospital], but it might be somebody else,” she said. “That compassion, I think, is just gone. The world has become so selfish.”