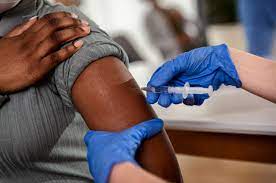 Local officials reinforced their call Tuesday for residents in southeast Texas to get a booster shot of the COVID-19 vaccine in order to fight off the surge of the omicron variant, echoing similar statements made by President Biden.

“I give a lot of credit to that third dose,” said Houston Mayor Sylvester Turner, who announced Dec. 17 that he had tested positive for COVID-19.  Turner is fully vaccinated and said he received a booster dose in October.  Despite doing so, Turner said he began to feel symptoms associated with bad allergies, thinking they were just that.

“They felt like sinus issues or allergies, slight sore throat, itchiness in the throat and then drainage, a cough,” he said.

Turner has been under self-quarantine at his home. He said overall, he feels okay and said that was because of his third dose of the vaccination.

“I’m doing much better,” he said. “I started experiencing symptoms late Thursday night. Never had a fever or anything and never felt any fatigue.”

Turner’s symptoms were in line with those described for the omicron variant, which doctors said has become the most dominant strand in the United States.

On Tuesday, Biden urged Americans to get fully vaccinated and a booster shot to fight off severe illness and infection.

“We should all be concerned about omicron but not panicked. If you’re fully vaccinated, especially if you got your booster shot, you are highly protected,” Biden said. The president also announced the Federal government will provide 500 million free at-home tests, as well as add more testing sites and pop-up vaccination clinics.

Testing has been a prime priority for many this week with long lines at testing locations sites throughout the Houston area leading up to the Christmas holiday.

”Testing is also important, because quite frankly, if I didn’t go and get tested and just thought what I thought I had, then I could have been infecting a whole lot of people,” Turner said, adding he supported the President’s direction on the fight against omicron.

Area health leaders said omicron is the most dominant variant in the Houston area, currently.

Dr. Linda Yancey, an infectious disease expert at Memorial Hermann Hospital, said she has seen an increase in the number of people inquiring about a booster dose given the rise of the omicron variant.

“We are seeing people who took a wait and see approach early on. They have waited. They have seen and they are coming in and getting vaccinated,” Yancey said.