A Houston police officer is under investigation for participating in the Capitol takeover and entering the building, Chief Art Acevedo on Wednesday said.

The chief said an officer, an 18-year veteran of the agency, will likely face federal charges after participating in the Jan. 6 insurrection. He received a complaint Sunday and found Facebook photos of the officer wearing a mask and holding a Trump flag at the Capitol. He did not identify the officer.

He has a disciplinary hearing on Friday with the chief.

“He got into the Capitol. I’m highly confident he will face federal charges,” Acevedo said, adding that he contacted the FBI about the officer’s possible participation.}

The announcement was shared as Acevedo outlined law enforcement preparation in Houston ahead of the presidential inauguration. A week earlier, thousands of people descending on the country’s Capitol as lawmakers gathered to tally the Electoral College vote to certify President-elect Joe Biden as the next commander-in-chief. Some of those participants breached the Capitol building during the riot.

The officer is expected to resign Thursday, said Doug Griffith, head of the Houston Police Officers’ Union. He identified the officer as a member of Westside patrol.

U.S. Attorney Ryan Patrick would not comment on any investigation or potential charges against anyone who may be suspected of participating in the Capitol riot.

He said U.S. Attorneys nationwide were on a call earlier Wednesday to coordinate with the Justice Department on these cases. The chief prosecutors will work with local FBI offices, he continued. The cases, he said, will be investigated and prosecuted out of Washington D.C.

“We would be in a support position to handle local arrests, appearances before a magistrate and execution of any search warrants or arrest warrants,” he continued.

Patrick said he was not yet aware of anyone being prosecuted in their local jurisdictions in connection to the Capitol insurrection.

As of Tuesday, federal charges have been filed against 27 people in connection to the siege, according to a George Washington University review of the cases. 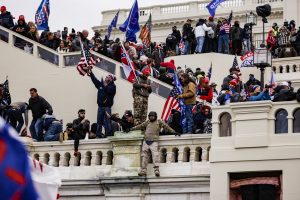