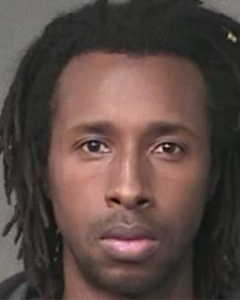 A Houston man implicated in three shootings and two deaths, including shooting a homeless man from his apartment balcony and a woman riding her bike, was sentenced to life in prison without parole this week, Harris County District Attorney Kim Ogg announced Wednesday.

“Making a homemade silencer and buying a scope to shoot a rifle from a balcony, like in this case, is not an act of impulse,” Ogg said. “There was planning and premeditation, and the fact that Mr. Stocker returned to the scene, months later, for a cold and calculated murder of the man who would have testified against him, is appalling.”

Jamin Kidron Stocker, 37, lived in a condominium with a second-floor balcony in the 1300 block of Rosewood that overlooked the parking lot at the intersection of Caroline and Wheeler.

On Aug. 21, 2017, a homeless man named Brent Tapp, 67, told police that Stocker shot him in the leg from his balcony. At that time, Stocker fled from his home and went on the run. Police searched his home and confiscated several stolen guns.

Police found a .22 caliber rifle with a scope and a homemade silencer and a stockpile of a specific brand and type of .45 caliber bullets, but they did not find a .45 caliber gun. A warrant for Stocker was issued on a charge of aggravated assault with a deadly weapon.

Two months later, Brent Tapp was gunned down in the same parking lot where he had been shot before. Police found bullet casings at the scene that matched the .45 caliber bullets found in Stocker’s home.

Stocker, who was still on the run, was arrested three months later and eventually charged with capital murder. He was charged with shooting Tapp in retaliation for reporting him to the police for the first shooting and for obstruction to prevent Tapp from testifying against him.

At a trial that wrapped up Tuesday, jurors heard that Stocker blamed Tapp for reporting him to police for the first shooting, which meant Stocker felt he had to flee from authorities and he lost his job and home. The jury also saw that Stocker’s phone had messages admitting to the initial shooting and ballistics from the murder scene matched the .45 caliber pistol that Stocker was caught with when he was arrested.

During the extensive investigation, police learned that the .22 caliber rifle, which Stocker bought in 2015, was the same gun used a fatal shooting on March 16, 2016, more than a year before the Tapp was first shot. Charlotte Walker was killed as she was riding her bike down the street in the 2700 block of Sampson. Stocker remains charged with murder in that case.

Assistant District Attorney Lauren Bard, who prosecuted the case in a week-long trial with ADA Jamie Burro, said the jurors made the right decision.

“The victim may have been homeless, but everyone deserves justice,” she said. “He was executed for reporting he was the victim of a crime.”

The case was investigated by the Houston Police Department and prosecuted by the Major Offenders Division of the Harris County District Attorney’s Office.