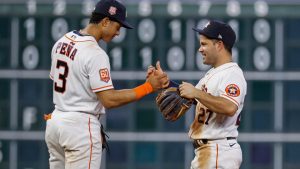 The Houston Astros are a great baseball team. After Tuesday night, they are now the best team in the American League with the No. 1 seed and trail only the Los Angeles Dodgers in all of Major League Baseball, thanks to a win and a New York Yankees loss.

But, a casual MLB fan may not know that considering the raucous fanfare surrounding the Yankees and their star-studded roster situated in the largest media market in the United States.

Outside of José Altuve, Alex Bregman and Justin Verlander many may not be familiar with Houston’s roster. New York on the other hand has household names up and down the lineup, but they still sit behind Houston in seeding.

The answer is simple: player development and management.

It is something the Astros not only excel in, they are arguably the best in baseball at discovering, unearthing and then developing talent. That has created a “next man up” mentality in Houston, and it has allowed them not just to take the AL No. 1 seed this late into the season, but it has allowed them to maintain a continued level of success.

Should they maintain their success and seeding into the postseason then they would get a bye in the Wild Card round of the 2022 MLB postseason and face the winner of the No. 3 and 4 Wild Card matchup.

That would likely be a team such as the Toronto Blue Jays. Not ideal for an AL Divisional Series matchup.

So while the No. 1 seed carries the prestige — especially denying the Yankees of that title — it also bears the burden of a potentially harder path through the postseason. Which is more important between the two is an obvious answer.

Still, acquiring the No. 1 on Tuesday evening helps create momentum. Something a club can’t have enough of as they steam toward the postseason.