The U.S. Capitol was quiet on Tuesday night, but in 24 hours, the House of Representatives is expected to impeach President Donald Trump for a second time.

It comes after violent mobs attacked the seat of U.S. democracy last week.

The new Article of Impeachment accuses Trump of inciting an insurrection — stirring up his fervent supporters with lies about an election he lost fair and square.

Rep. Lizzie Fletcher co-sponsored the article and will vote yes, as well.

“Really, the choice in front of us is supporting the Constitution and our democratic form of government. That’s the choice and it shouldn’t be a partisan issue,” Fletcher said.

Fletcher is hopeful more Republicans will vote to impeach as well.

Of the Republicans, Rep. Kevin Brady said he will vote no and says it could make things worse.

He told us in a statement:

“Those calling for impeachment or invoking the 25th Amendment in response to President Trump’s rhetoric this week are themselves engaging in intemperate and inflammatory language and calling for action that is equally irresponsible and could well incite further violence. They are placing a desire for vengeance above the best interests of the country. President-elect Joe Biden is right to reject calls to go down this dangerous path which will only further divide the country. We have great and important tasks to accomplish soon and we must focus on defeating COVID, rebuilding our economy and getting back to normal as quickly as possible. I am committed to working together with President-elect Biden to do just that.”

“This is something we all saw for ourselves,” Garcia said. “It was live. It was there on TV. We members of Congress were victims. We were witnesses. We lived it.”

With only eight days left until Trump’s term ends, the FBI is warning of more possible violence. Garcia and other Texas Democrats said removing the President is a national security priority.

“We must do this,” Garcia said. “Every day he’s in office, he’s a danger to our country. Today, tomorrow, every day up until inaugural day he’s a danger.”

If impeached, a trial in the Senate likely to begin the week of Biden’s inauguration. If convicted, Trump would be barred from holding federal office ever again. 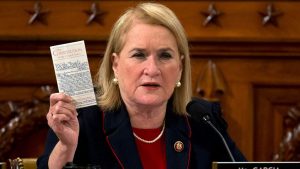