US regulators did not flag any major safety concerns with Moderna’s coronavirus vaccine candidate, paving the way for an expected emergency OK that could come later this week.

But that doesn’t mean the two-dose vaccine is side-effect free. More than nine in 10 people who got Moderna’s shot registered some side effects, which were mostly mild or moderate in severity and lasted one to three days after injection.

A 53-page briefing document on Moderna’s vaccine released Tuesday by the US Food and Drug Administration gave us the most detailed look yet at how safe and effective the shot is.

Most of these are commonly expected with vaccines, related to the shot generating an immune response in the body. On the whole, these reactions were unpleasant but not threatening.

The most common side effects were:

It’s tricky to directly compare Moderna’s candidate to Pfizer’s vaccine, which won an emergency OK from the US Food and Drug Administration last Friday.

The two clinical trials followed different protocols and split up their participants differently. For instance, Pfizer’s study divided results by age into two buckets: older and younger than 55. While setting the two studies side by side is like comparing apples and oranges, it appears that Moderna’s shot carried more common and severe side effects than Pfizer’s.

These massive clinical trials — each enrolling tens of thousands of people — found both vaccines to be overwhelmingly protective against COVID-19. Pfizer’s shot is 95% effective, and Moderna’s shot is 94% effective. It’s not clear if either vaccine prevents transmission of the virus, and it’s unknown how long-lasting that protection will be.

An independent expert panel will vote Thursday on whether or not to recommend Moderna’s vaccine for emergency use authorization. The FDA intends to OK the shot on Friday, The New York Times reported, citing anonymous people familiar with the agency’s plans. 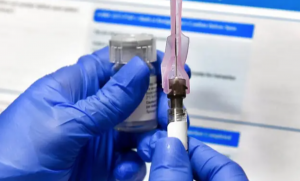