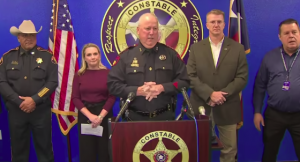 Constable Herman said in a news release that the cases were slated for dismissal and the judge cited them as having “no probable cause.” He added that his office has refiled more than 200 violent and non-violent cases recently.

“Harris County has become a county of little of no consequence when it comes to breaking our laws,” Herman said. “Criminals are now emboldened and continue to victimize our citizens. These judges’ and magistrates’ actions are a direct result of the new type of criminals we have now in Harris County.”

During a news conference, Herman referred to an image that showed several officers that died in the line of duty, including the Harris County Sheriff’s Office Deputy Darren Almendarez, who was killed in April by suspected catalytic converter thieves, and Harris County Pct. 7 Constable Deputy Jennifer Chavis, who was killed by a suspected drunk driver.

“We’re basically telling these criminals, ‘hey, y’all can go break the law. we’ll just say there’s no probable cause and dismiss your case.’” he said.

“We have finally given a voice to the complainants,” he said.