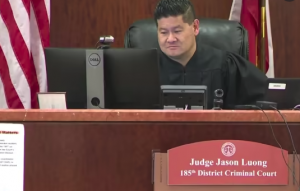 The Harris County District Attorney’s Office is requesting the recusal of a criminal court judge who they claim is partial to defendants in child sex abuse cases.

In a motion filed April 12, District Attorney Kim Ogg and Assistant District Attorney Tyler White asked Judge Jason Luong of the 185th judicial district to step down from a potential re-trial of a defendant whose case went before his court.

In March, 39-year-old Phillip Recio was sentenced to 25 years in prison after a jury convicted him of continuous sexual abuse of a child. He is now seeking a new trial on the grounds of insufficient counsel.

According to the motion, after Recio’s sentencing, Luong called the prosecutors and defense attorney into his chambers to provide “trial feedback”.

During that meeting, the D.A.’s office alleges the judge told the group he thought the jury got the verdict wrong and the sentence was too harsh “because he personally did not believe there was enough evidence to convict the defendant,” adding that Luong criticized one prosecutor for making the child complainants in sexual abuse cases “too believable”, the motion states.

Prosecutors also claim Luong equated child sexual abuse cases with the Salem witch trials, quoting the judge as saying, “just a mere outcry statement from a child is enough to put a man away for the rest of his life,”.

The motion states that the judge claimed text messages between the child victim and the defendant were “normal” and that he has had similar conversations with a child.

Prosecutors allege the judge was referring to text messages in which Recio told the child he missed her, wanted to cuddle, and begged her to send pictures of herself.

The motion outlines what the state asserts is a similar situation with Judge Luong in February 2022 after the acquittal of a defendant charged with aggravated sexual assault of a child.

Prosecutors say Luong once again called them back to his chambers for “trial feedback” in which the judge told two assistant D.A.’s they were “‘too talented’ to be trying ‘these cases’ and that as a result many innocent men will go to prison,” according to the court document.

The D.A.’s office says during that meeting, Luong continually expressed his belief that children lie.

In court documents, the state wrote: “Judge Luong’s actions have created an appearance of partiality toward the defendant and bias against the law upon which the State is entitled to rely. Therefore he should be recused from further participation in this case,”.

“It was very off-putting to hear some of those comments that were made. Children may minimize or confuse details related to their abuse but they’re rarely going to lie about it,” said Olivia Rivers, chief executive officer of The Bridge Over Troubled Waters, a Harris County non-profit organization that provides safety and support to victims of domestic and sexual violence.

Attorney Brian Wice says he believes the regional presiding judge who will hear the motion to recuse Wednesday morning will grant the state its request.

“Judges essentially are tasked with three plain and simple mandates: One, to call balls and strikes without passion or prejudice. Two, stay the heck out of the way. And three, not care one whit who wins or loses. This motion paints a portrait of a judge who apparently has come up short on one or more of those three mandates,” Wice said.