The estimated number of active COVID-19 cases in Harris County is 42,350 as of Jan. 11, according to data from the Harris County Public Health System. The active case total in the county has now increased by more than 10,000 since the start of January.

The county previously surpassed 40,000 active cases in late July, reaching a peak of more than 48,260 on July 31. However, the county adjusted the way it tracked active cases Aug. 1 to begin excluding cases for which it had been “28 days or more since the case was reported, or released from [the] hospital and [is] not deceased,” which caused the active case count to fall by just under 20,000 cases in one day. Officials said the active case count can be hard to accurately track on a daily basis due to the sheer number of cases in the county.

The quick rise in active cases is occurring as public health officials have confirmed more than 2,400 new cases of COVID-19 for the fifth consecutive day in Harris County. Another 3,990 new cases were confirmed on Jan. 11, including 1,450 new cases in the city of Houston and 2,540 in the county outside of the city.

The seven-day average for new daily cases in Harris County was above 2,700 as of Jan. 27, the second-highest point since the pandemic began, behind the period of time immediately after the state released a large backlog of test results in late September. 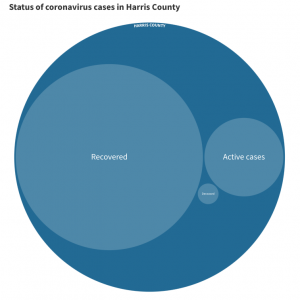