Gov. Greg Abbott is getting the COVID-19 vaccine as the number of patients hospitalized with the virus in Texas has again climbed past the troubling mark of 10,000 for the first time since this summer’s deadly peak.

Abbott’s aides say he will receive the shot on live television Tuesday at Austin hospital to help reassure the public that inoculations are safe. The announcement comes on the same day that President-elect Joe Biden took a dose of Pfizer vaccine at a hospital not far from his Delaware home, which was also broadcast on live television.

“Increasingly, Texas residents and even some medical personnel have expressed apprehension about taking the vaccine, and the Governor will receive it on live TV to instill confidence in it,” Abbott spokeswoman Renae Eze said. “The Governor would not ask any Texan to do something he would not do himself.” 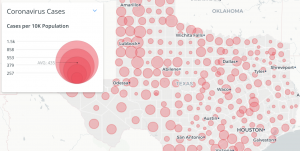 Eze said federal and state health officials had pressed Abbott to take the vaccine, including Dr. Robert Redfield, the director of the U.S. Centers for Disease Control and Prevention. Other governors have said they will wait to get the vaccine, although Abbott will not be the first. Last week, West Virginia Gov. Jim Justice was among the first top elected officials in the nation to receive the vaccine.

Abbott has emphasized that hundreds of thousands of doses are coming to Texas at a time when newly confirmed cases and hospitalizations continue soaring. Texas has not had this many hospitalized COVID-19 patients since July when there were more than 10,800 patients across the state.

Last Thursday smashed a single-day record for new cases with more than 16,000, which state officials partly attributed to holiday gatherings.

But Abbott has said he will not order a new round of lockdown measures, and on Monday, even announced a new reopening: the Texas Capitol will, which has been closed since March.

The Capitol will reopen on Jan. 4, which is roughly a week before the Texas Legislature reconvenes for the first time since 2019.

Around the Capitol, health officials say the spread of the virus is worsening. On Monday, public health officials in Austin said that new cases were up 86% since the beginning of December. Officials recommended that Austin residents avoid travel and avoid gatherings, and also warned that a curfew could be installed if hospitalizations continue to rise.

“The best gift we can give this Christmas is masking and distancing and staying home if we can,” said Dr. Mark Escott, the city’s interim health authority.

Abbott said health and safety protocols will be put in place for the Capitol’s reopening. More than 26,000 frontline and other essential workers in Texas as of Monday had received the first vaccinations that began arriving this month, according to state health officials. Abbott has said more than 1 million doses of the vaccine will have been distributed in Texas by the end of the month.