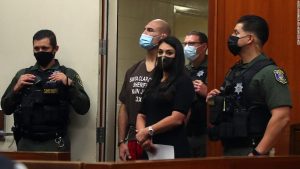 The father and mother of the alleged assault victim of former Texas A&M wide receiver Demond Demas were arrested on Thursday and charged with misdemeanor assault, according to a report in the Houston Chronicle.

Demas turned himself in on Wednesday on a charge of assault family violence that reportedly occurred Saturday. He posted $5,000 bail and was released.

According to a probable cause statement obtained by the Brazos County Sheriff’s Office, Demas’s girlfriend said that Demas pushed her head into the wall. She bit him on the shoulder, and then Demas allegedly threw her off the bed onto the floor, which caused her top front teeth to go through her bottom lip.

Demas “admitted to initiating the verbal altercation” and said that he “took her to the ground” when it got physical, which caused the victim to bite her lip.

Per Demas’s girlfriend, the couple had been in a relationship for a year.