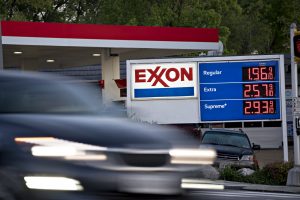 Woods also mounted an extensive defense of fossil fuels, calling them a “higher purpose” that aids global prosperity at a time when European peers are looking at renewables as the future.

“These are difficult times,” Woods said in the message, the text of which was released by the company Wednesday. “We are making tough decisions, some of which will result in friends and colleagues leaving the company.”

The oil behemoth’s job cuts are just the latest sign of struggle among U.S. energy producers navigating the industry’s worst downturn in recent memory. This week two high-profile mergers were announced as explorers seek to gain scale and cut costs to survive the devastating impact of Covid-19 on global demand for fuel. Many have succumbed to bankruptcy.

Exxon’s stock has plunged 52% this year and the company all but ended its aggressive, $30 billion-a-year counter-cyclical growth strategy. The company was forced to slash its capital spending budget by a third, or $10 billion, after crude dropped to the lowest in a generation. Rivals such as BP Plc and Chevron Corp. have also announced large layoffs in recent weeks.

But Woods was clear that the cutbacks are not a sign that his faith in oil and gas is in any way diminished. Fossil fuels will remain about half of the global energy mix by 2040 and often provide the most cost-effective pathway to development in poor countries, especially those in Africa and Asia, Woods said.

“We often talk of companies having a higher purpose,” he said. “Well, I can think of no higher purpose than helping people and communities around the world grow in prosperity and achieve their aspirations for a better life through affordable energy.”

Most of Europe’s large energy companies have adopted aggressive targets to become carbon neutral by mid-century, in part involving big investment in wind, solar and battery storage. Exxon, under Woods, won’t be taking this course. Renewables on their own are not enough to solve climate change, according to Exxon, which claims to be focusing on novel technologies in partnerships with universities and start-up businesses.

“Today’s alternatives don’t consistently offer the energy density, scale, transportability, availability — and most importantly — the affordability required to be widely accepted,” he said.

The stance appears to be at odds with a growing trend this year. Just last month China pledged to be carbon neutral by 2060, a shift that would set into motion a drop in oil and gas consumption, according to government-affiliated researchers. The EU is aiming to reach neutrality across all greenhouse gases by 2050. California announced a new plan to end the sale of gasoline-powered cars by 2035.

Significant investments are needed by oil and gas companies such as Exxon to meet projected long-term consumption, Woods said.

“This is a compelling investment case for the industry and our company — and is foundational to our long term strategies and plans.”