Public defender Victoria Gilcrease-Garcia told the court her client was unlikely to commit a crime again. She said Guedes was an only child who grew up poor after his parents’ marriage faltered and the family bakeries went under. He suffered from depression and bipolar disorder and felt ostracized as a gay youth in a culture did not welcome his sexuality in the 80s, his public defender Victoria Gilcrease-Garcia told the court. She noted that her client didn’t turn to drugs or alcohol, he poured his heart into becoming a flight attendant. He learned English, Spanish, German, Dutch and Arabic.

But the Brazilian airlines rejected him, he told the judge, because he was too old and not classically handsome. After overstaying a tourist visa in the U.S., he rekindled the idea of trying to be a flight attendant in the U.S., which was more accepting of gay men. His supervisor at a pizza joint he was working at told Guedes he could help him get the papers he needed to pursue a job with an airline.

Guedes began using a Social Security card in the dead child’s name. He went on to obtained a pile of official documents in Ladd’s name.

As his lawyer put it, the entire endeavor was “a crime of desperation,” but Guedes never used the ID to steal from or harm others. The accounts in the many letters sent to the judge portrayed a kind, gentle man who helped an elderly passengers find her son upon arrival, volunteered on a flight full of Afghan refugees and sponsored a child in Ghana for the entirety of his schooling. 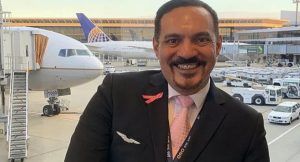 None of them knew he was not Erik.

According to court documents, the real William Ericson Ladd, of Georgia, died a month before his fifth birthday in a car accident. Guedes used Ladd’s name and his birth certificate which listed his living parents names to obtain a passport.

Forty-two years later on what would have been the boy’s 47th birthday, a flight attendant with that same name on his ID was stopped by customs officials at George Bush Intercontinental Airport.

Officials used the fingerprints Guedes gave on his United background check to determine that the man serving drinks and instructing passengers to take their seats on flights to the Netherlands, Argentina, Brazil, Chile, Ecuador and Peru to check out whether he was really Ladd. Those prints matched the birth records of a son born to the Guedes family in 1972, according to court documents.

Social media posts of the man posing as Ladd showed him with family in Brazil, where about half his flights as an a United employee had been. A woman linked to those images, Maria Auxiliadora Duarte Guedes, told federal agents from the U.S. Diplomatic Security Service in Brazil that she didn’t know anyone named William Ericson Ladd. But she did have a son born in Brazil. The final piece of the puzzle were the fingerprints on Guedes’ ID card in Brazil. They matched the United employee’s passport application for Ladd.

At Bush Airport in September, Guedes identified himself as William Ericson Ladd. An official warned him it was a federal crime to lie to him. Guedes said he was born in the United States but was raised by his missionary parents in Brazil.

When the official notified him the government had a death certificate for William Ericson Ladd, Guedes became silent, according to court documents. The flight attendant ultimately signed a new fingerprint sheet using the name Ricardo Guedes.

As his scam fell apart, Guedes referenced his lifelong goal aloud. He told officials, “I had a dream, and the dream is over. Now I have to face reality.” He indicated in court he intended to go back to Brazil and care for his parents who are in their 70s.

Before adjourning, the judge addressed Guedes saying, “Good luck to you, sir. I know you have a difficult road ahead and I’m sure that I will never see you and you will never be in court again.”

Guedes smiled at the kindness and responded: “You’re right.”