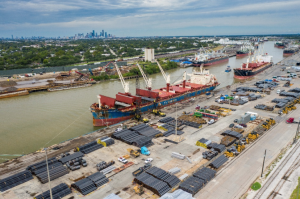 Port Houston, America’s distribution hub for the next generation, saw double-digit TEU growth again in September. Port Houstoncontainer activity for September 2021 was 281,500 TEUs, up 11% compared to the same month last year. This is the seventh consecutive month for containers to show double-digit growth, driven largely by increased consumer spending. Year-to-date, TEUs are up 16% compared to 2020.

Steel imports are also up, increasing 161% this month compared to September 2020, and are up 28% year-to-date. This growth reflects increased activity in the energy industry. Texas onshore and the offshore rig count is up 243 rigs from October 1, 2020, almost double compared to last year, fueling an increase in demand for Oil Country Tubular Goods (steel pipe) for drilling operations.

“We expect container, as well as demand for steel to, continue growing through the remainder of the fourth quarter and into next year,” said Roger Guenther, Executive Director at Port Houston. “It’s an exciting time at Port Houston, and we are accelerating infrastructure expansion now for increased capacity in the future.” Earlier this week the Port Commission of the Port of Houston Authority awarded the first major dredge contract for the billion-dollar Houston Ship Channel Expansion – Project 11.

Great Lakes Dredge & Dock Company, LLC was awarded up to $95.4 Million to dredge 11½-miles of the 52-mile channel, widening a major portion of the Galveston Bay reach from 530 to 700 feet. The work includes the construction of a new bird island and oyster mitigation. Port Houston negotiated multiple options and selected the approach with the most reduction in overall NOx emissions, using more efficient equipment and providing for retrofitting emission-reduction technology.