The House and Senate are convening Wednesday for a joint session of Congress to tally electoral votes from all 50 states and the District of Columbia, the final step in confirming President-elect Joe Biden’s victory in the presidential election over challenges from Republicans that will lengthen the proceedings.

Required under the Constitution, the meeting is typically a ceremonial affair, marking the final step in the electoral process before the presidential inauguration on January 20. But this year’s session is far from routine, as a coalition of Republicans from both chambers will try to reject some states’ election results over alleged election irregularities, while outside the halls of Congress, President Trump’s supporters have descended on the nation’s capital to make their final push to keep him in office.

Soon after the joint session began, GOP lawmakers objected to results from Arizona, a move that prompts two hours of debate in each chamber. A majority of each chamber would be required to reject Arizona’s electors, a virtual impossibility has given Democrats’ control of the House. More lawmakers have promised to contest the results in Pennsylvania and other battleground states.

In an extraordinary rebuke just before the joint session convened, Vice President Mike Pence defied the president and told lawmakers he does not have the authority to reject states’ electoral votes. Mr. Trump has repeatedly pressured Pence to reject votes from several states, a power the vice president does not have under the Constitution.

The plan from some GOP lawmakers to challenge the electoral votes split Senate Republicans, with more than a dozen committing to counting the results.

The joint sessions to tally the results of the 2012 and 2016 elections each lasted less than an hour. But Wednesday’s event is expected to stretch into the evening because of the Republican attempts to toss the electoral votes from some battleground states. 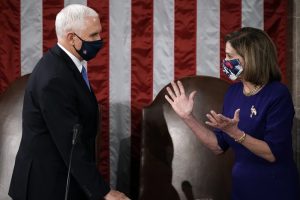